With modern smartphones having integrated application stores, the hardest thing about the application purchasing process has become the payment itself. Well, at least for some consumers (i.e. those without credit cards). But the makers of these smartphones, along with the carriers that sell and service them, have come up with an simple solution to ensure that everyone can buy applications with minimal fuss. 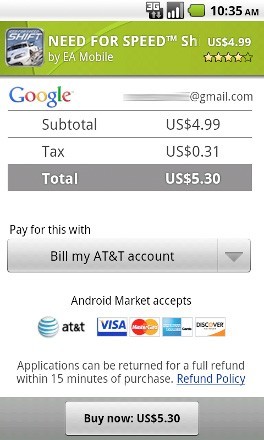 Expect to see your carrier as a billing option in your devices marketplace in 2011.

Google and AT&T made headlines a few weeks ago when an option to "Bill my AT&T account" appeared in the Android Market. Other carriers have similar arrangements, such as Australia's Telstra network, which allows customers to bill Windows Phone 7 marketplace purchases to their accounts. Now Neowin has word that a host of carriers are working with major smartphone makers to implement this billing system for everyone.  The theory is that by making application purchasing easier, more people will buy applications – with both the carrier and store owner (Google, Microsoft, Nokia, Blackberry) taking cuts of purchases. Carriers also benefit from the higher data usage that would result.

The question is, will Apple come on board? We can't say for sure, but it's safe to say that Apple won’t be rushing into a system that sees them receiving reduced profits from their highly successful App Store. That being said, if this billing idea works as everyone's hoping it will – Apple may find they have no choice, as the prospect of massively increased sales is hard to resist.