Chrome OS is nearly finished and ready to be pushed to the masses. The OS is planned to be put onto "smartbooks," which is a device slightly smaller than a netbook that has the internals of a smartphone; hence, "smartbook." The project is on track to be pushed out on at least one device by the end of November, according to a report by Digitimes. 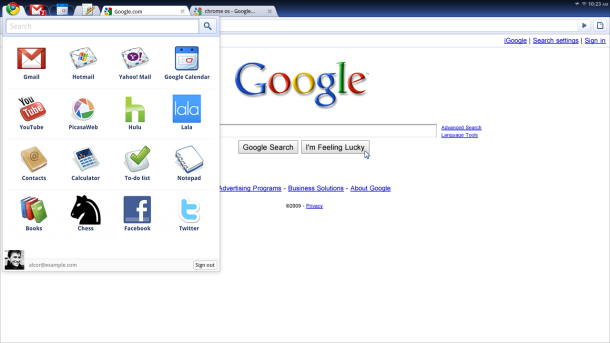 Three companies are currently working on Chrome smartbooks, two of which will be available in December instead of November. Google will produce an ARM-based Chrome notebook that will be manufactured by Inventec and is expected to ship 60,000-70,000 units initially. The device will not be sold through retail channels, and instead will use a strategy similar to how they sold the Nexus One, according to CNET. When the Nexus One was first launched, it was sold strictly through Google's own website and was a very open platform for developers to experiment on. This similar strategy could help users and developers get excited about Chrome OS and let them see what kinds of potential the platform holds. Allowing a digital "sandbox" to play in first will help allow developers find out exactly what they can do and allow them to better work with the system.

Acer and HP will launch their versions of a Chrome OS smartbook in December to see what type of response the new platform will get. Both of the products will be manufactured by Quanta Computer, while ASUS is going to wait and see if it should invest in Chrome OS. The web store for Chrome OS is also expected to open its doors with the release of Google's Chrome OS notebook.

Google's Chrome OS notebook is on schedule to be available by the end of November, with both Acer and HP's offerings following in December.