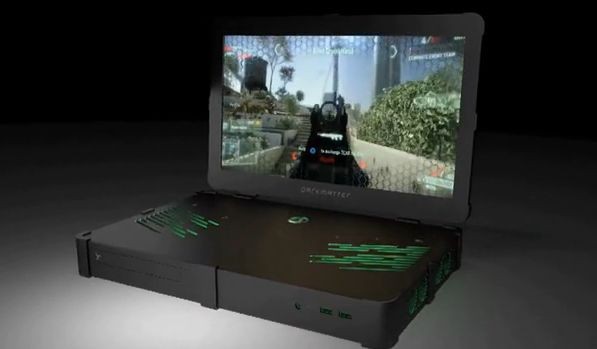 There have been a number of DIY projects from enterprising game mod creators that have assembled laptops with Xbox 360 hardware inside. However, a company called Techjango wants the opportunity to create an actual Xbox 360 laptop that anyone can buy, without having to create and assemble the product themselves.

The result is Darkmatter, which is currently listed for crowd funding help on Kickstarter. The company also said recently that it would also add support for Microsoft's upcoming Xbox One if it reaches its funding goal, although that product would only be released in pre-assembled kit form.

Techjango says the display for Darkmatter is 15.6 inches with a resolution of 1366x768. Darkmatter will have all the ports that the Xbox 360 has, plus extras like a internal stereo amplifier, two internal speakers and a stereo headphone jack. It supports up to two wired or wireless Xbox 360 controllers, along with the Kinect add-on.

Darkmatter's case is assembled on a 3D printer with ABS plastic, with Techjango adding, "We've used high quality 3mm black acrylic for the panels, with 3D printed interconnects and miscellaneous parts." It even has an interesting approach towards its user interface. Techjango states:

We designed and built a custom capacitive touch interface board based on the Arduino processor and incorporated it into Darkmatter. We call this board the Xduino360. Since the Xbox 360 already comes with two touch controls (Power and Eject), we wanted to extend that human interface paradigm to all the other controls, for example volume controls, mute and sync. That's exactly what the Xduino360 board allows us to do. All the control icons are laser etched into the acrylic case; you simply touch them, and voila! It works!

As far as power, there's a power brick included for the Darkmatter project but at the moment there's not an actual battery, which means you still can't use it without a connection to a socket.

If funding is successful, you could buy a fully assembled Darkmatter Xbox 360 laptop for $999, with lower prices if you buy the product in kit form. As of this writing, the Darkmatter Kickstarter effort has raised about 75 percent of its goal of $25,000, with less than eight days to go.