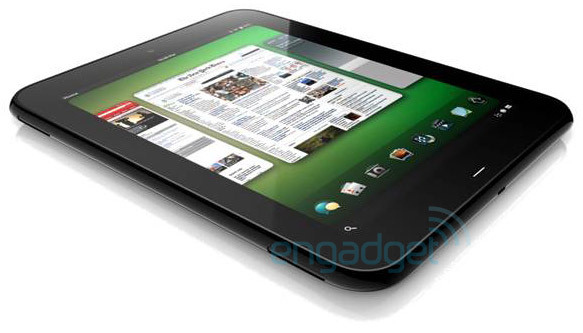 It is expected that HP will officially reveal the tablets at an event on February 9, where they may also be unveiling new smartphones, and even netbooks, which run Palm's WebOS.

The render of the device appears to be totally buttonless, fitting with Palm's current line of phones, the Pre and Pixi. According to Engadget, HP will offer two models, a 9-inch, known currently as "Topaz," and a 7-inch, called "Opal." There also appears to be a front-facing camera on the device, implying the ability to place video calls.

The devices are expected to launch in September, with a Wifi model, a 3G model for AT&T, and an LTE model for Verizon. An LTE version is targeted for AT&T in July of 2012. Internationally, Bell and Rogers will be getting the 3G tablets in September, and a number of European carriers will get them at the same time, including O2, Vodafone, and Orange.

Rumours of the tablet started from the moment HP purchased Palm, and especially picked up when HP all but cancelled the Windows 7-toting HP Slate, instead targeting it at businesses.