A developer going by the name of damianpiwowarski on Reddit has clearly been inspired by the recent reveal of the iPhone X and its top center screen "cutout", and has subsequently made an app to turn any smartphone into an iPhone X, for those who feel like they are being left out of this seemingly new phenomenon. 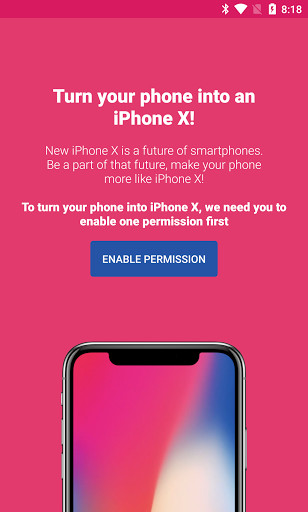 Requiring Lollipop 5 and up, the developer says:

Current trends in smartphones business are following one idea - smartphones have to bezel less. But all of that fancy stuff like cameras has to go somewhere! And they do, in some sort of a hole or a notch. Without that your phone is so ollldddddddd and uglyyyyyy.

Upon installing the app, which is free, there's also an option to turn it into Essential's PH-1 phone for the "diehard Android fans" (also featuring a smaller, but more visible cut out) and installers can also donate, which according to the developer, does nothing but remove ads from the app.

A word of warning though, as noted on the Play Store page for the app, "This app may potentially trigger seizures for people with photosensitive epilepsy. Viewer discretion is advised". That description relates to the flashy color show you get when you set your phone in iPhone X or Essential mode. Smartphone upgrader 2017 has been downloaded 18 times as of writing and has an overall rating of 4.8 stars.

On the left, iPhone X mode. On the right, Essentials PH-1!

The developer is responsible for a couple of other more serious apps; Adapticons, which has been downloaded over 800 times, with an average rating of 4.1 and Navbar Apps, a Nav bar skinner for Android, downloaded over 12,000 times with a rating of 4.4.