This is a spoiler-free review of Diablo II: Resurrected

As you may have assumed after reading the title, Diablo II: Resurrected is a remastered version of Diablo II and its expansion, Lord of Destruction, which released in 2000 and 2001, respectively. It features all of the content that launched twenty years ago, but adds modern refinements like upgraded visuals, a redesigned user interface, and an expanded stash. This new version was developed by Blizzard Entertainment and Activision's Vicarious Visions studio. On the whole, it's an impressive project, but it may be a little dated — particularly when it comes to inventory management — to be thoroughly enjoyable for all gamers.

For those of you new to the franchise, Diablo II: Resurrected is a dark fantasy isometric action game where you pick a unique hero and work your way through a number of environments, pursuing a mysterious figure known as the Dark Wanderer. You'll traverse somewhat randomized swamps and deserts in a quest that eventually pits you against the titular villain.

Diablo II: Resurrected features a number of unique environments and locations that increase in splendor. While the camp you start at is quite understated, you'll eventually explore desert cities carved out of rock and venture into crypts that haven't been opened in generations. The visual variety is quite astounding and there are a number of biomes throughout the adventure. Each area also has distinct enemies that increase in difficulty. Diablo II: Resurrected constantly keeps you on your toes because complacency leads to death.

The plot is simply fantastic and I'd forgotten how many twists and turns are woven in there. It has been almost twenty years since I played the original. Running Diablo II on my old HP laptop, in my college dorm, has to be one of my best memories. It was a great way to relax after studying biology and chemistry the whole day. Diablo II not only featured a rich story, but the build-up to the climax has to be one of the best in gaming history. Even to this day, many other titles can't match it. The stellar plot is a testament to the writers who carefully constructed the narrative and slowly let the player figure out what was going on.

For the most part, Diablo II: Resurrected plays like a traditional hack-and-slash experience. You equip increasing powerful weapons and armor, while taking on greater challenges. However, each hero has unique abilities that make the fight against the legions of Hell a little easier. For example, the Druid can transform into a werewolf or "werebear". The Amazon, Assassin, Necromancer, Paladin, and others have their own skills to choose from, though some are more dramatic than others.

To illustrate this, let's compare the Druid and the Paladin. The Paladin has a number of devastating abilities like the Holy Bolt that vanquishes enemies or the Holy Shield to protect himself from arcane damage. He's a strong character, but the Druid is just so much more fun. Transforming into different creatures never gets old and requires you to experiment with more balanced builds if you want to use brute force and magic at the same time. I'd recommend trying all of the characters — particularly the Assassin and Druid since they were part of the Lord of Destruction expansion — to find the one you like the most. 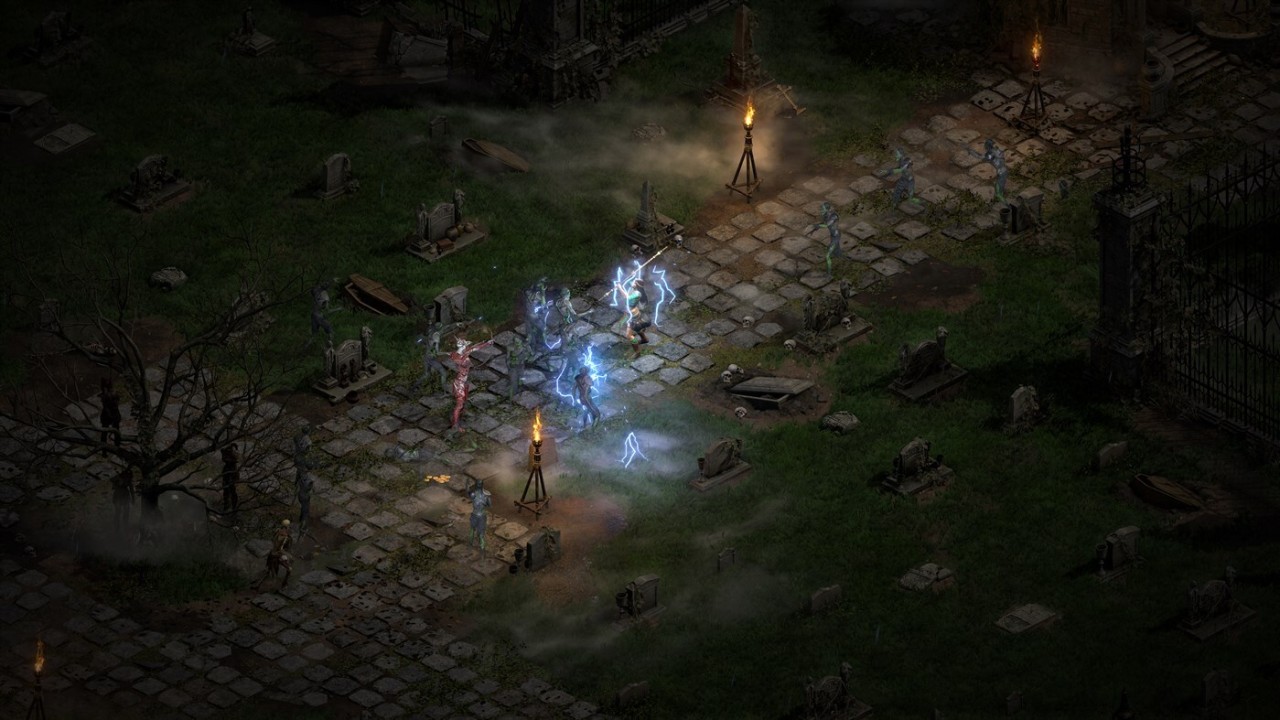 Diablo II: Resurrected pays homage to the original's graphics, but with greatly enhanced effects. If you were expecting a visual upgrade along the lines of Diablo III, or the upcoming Diablo IV for that matter, you’ll be disappointed. Diablo II: Resurrected stays true to the look of the cult classic, but features all-new textures, animations, and cutscenes.

It's clear that a tremendous amount of work went into this game. Diablo II: Resurrected also adds wet surfaces, better weather, real-time reflections, and much more. Suffice to say, it's a noticeable upgrade if you compare the two versions side by side. 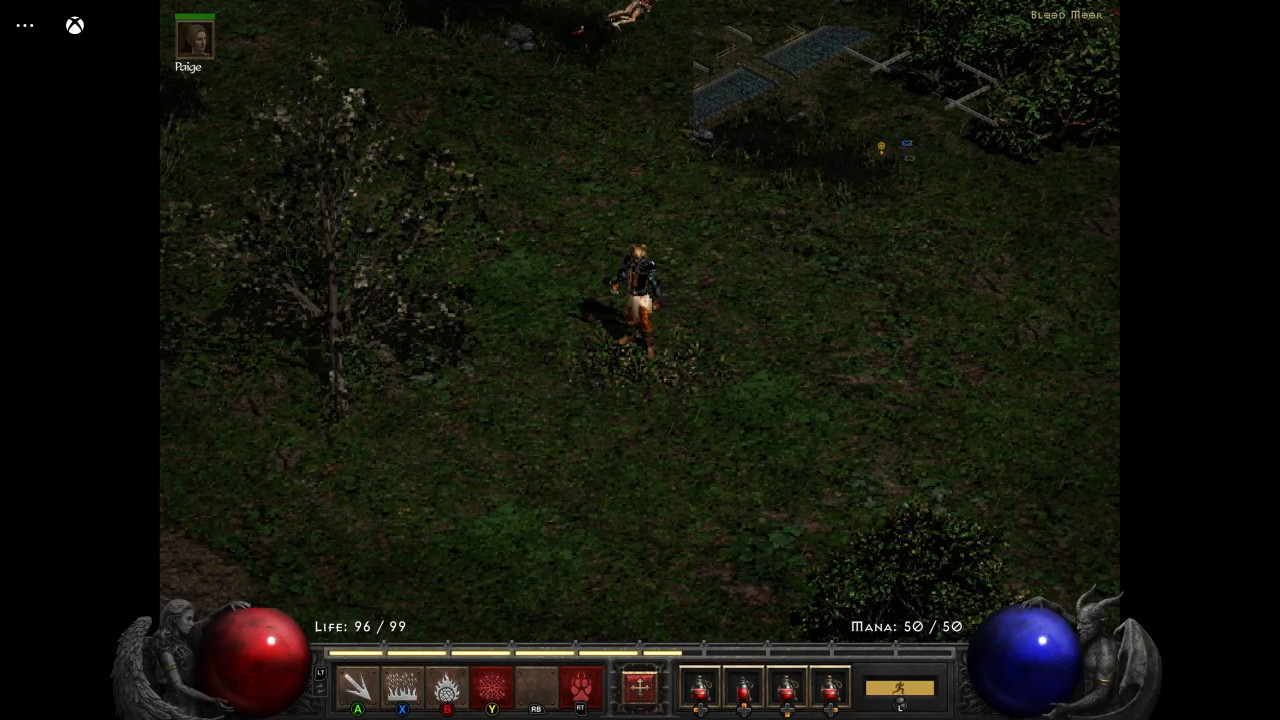 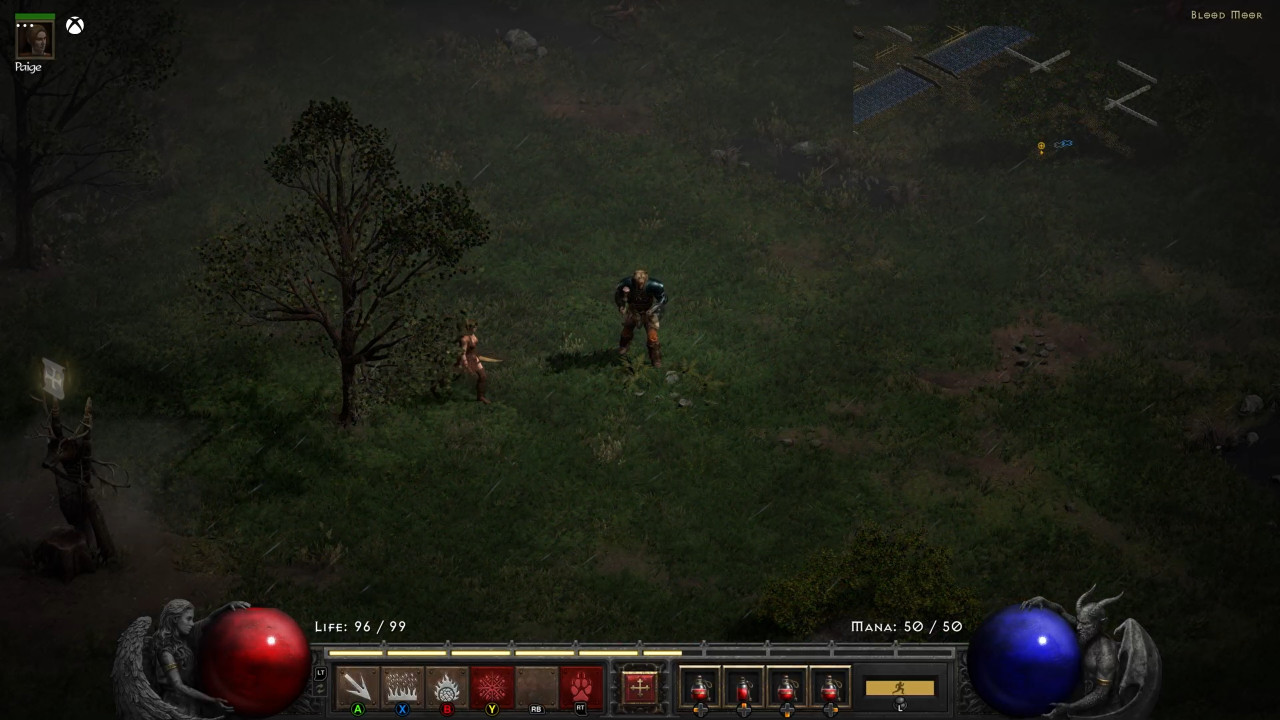 If you haven't played Diablo II in a while, you may feel that the game looks relatively the same, it just runs at a higher resolution. However, that couldn't be further from the truth. When you kill enemies like Dark Hunters, encounter a pool of water in the middle of a marsh, or witness the light shimmering on a wet brick bridge, you’ll realize that Diablo II: Resurrected is a modern game. Blizzard and Vicarious Visions have done an excellent job with the new graphics. Because of this, the remaster shines.

If you're ever curious as to what the original looked like, you can always press Left Trigger and the View button together. The View button is commonly referred to as the boxes button on the Xbox Series X|S and Xbox One controllers. I promise you you'll be shocked and astounded by the results. I had personally forgotten how clunky the old animations were. 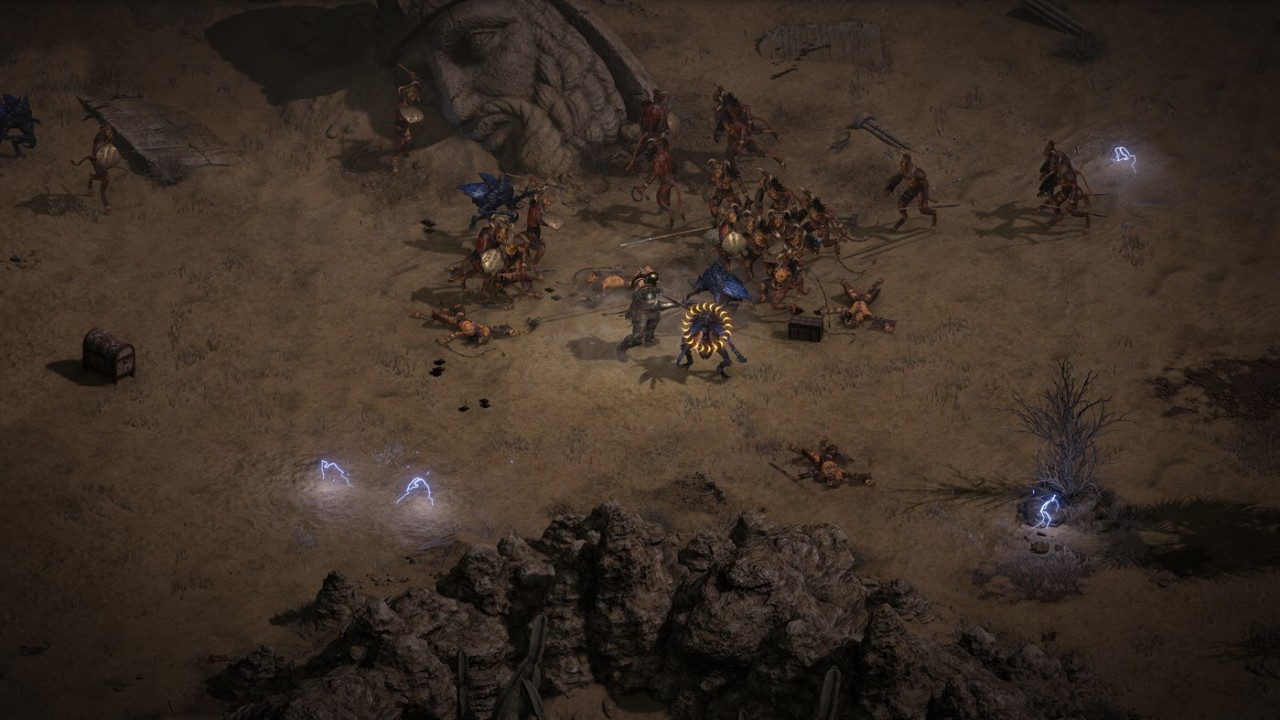 Diablo II: Resurrected offers two modes on Xbox Series X. The default, oddly enough, is "Quality". This boosts the resolution to 4K, but locks the game to just 30 frames per second (FPS). Despite how crisp Diablo II: Resurrected looks on Quality mode, I wouldn't recommend it because the input lag is horrendous. I would go as far as to say that it's unplayable on this setting because it feels like you're trudging through molasses.

Luckily, there's a "Performance" option that lowers the resolution to around 1440p — based on our estimate — and boosts the frame rate to 60 FPS. This dramatically enhances the experience because the title is much more responsive. When you load Diablo II: Resurrected, your first step should be to go to "Settings" and change the visuals from Quality to Performance.

It's curious as to why we don't have a 4K 60 FPS mode on current-generation consoles, at least for "Offline" single player. To me, it seems like a problem with optimization more than anything else. Unfortunately, I don't think Blizzard or Vicarious Visions will go back and change this on PlayStation 5 and Xbox Series X. 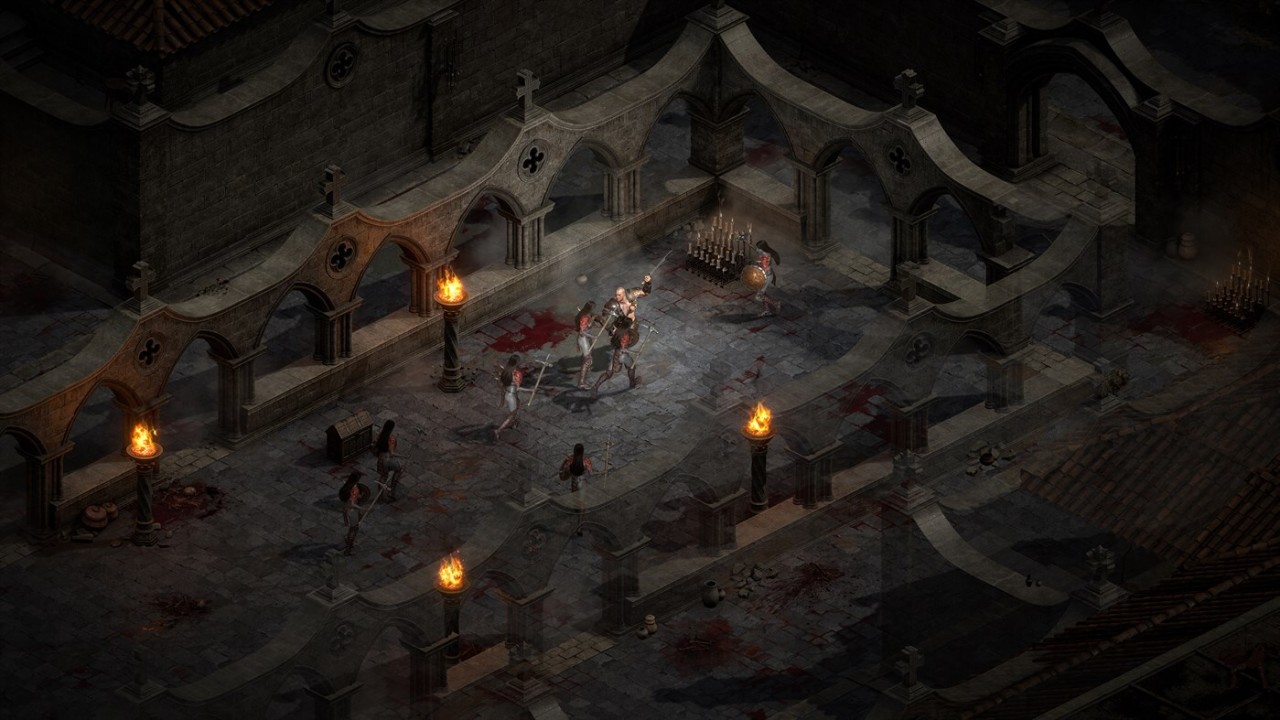 Inventory management has to be my biggest gripe with Diablo II: Resurrected. While it's a little cumbersome to use a thumbstick to hover over objects, it gets worse when you want to sell tiny gems or other miscellaneous items to a trader. You have to inelegantly maneuver the cursor over them and hold a button. Understandably, this isn't an issue with a mouse and keyboard, but it's one of the most torturous acts on consoles. Surely there's a better solution.

Diablo III's circular inventory system was tailored for PlayStation 4 and Xbox One — despite some questionable results — and is a marked improvement over Diablo II: Resurrected. The development team should've included a similar setup that was made for thumbsticks in this remaster.

Now that's out of the way, let me tell you about why you should consider playing Diablo II: Resurrected with a controller. Instead of clicking enemies or clicking where to go, you can control your character directly through the thumbstick. This gives the game a more action-focused feel because you're directly connected to everything happening on screen. Let's say that you want to kite an enemy, but there aren't a lot of options except for a massive tree. Well, with a controller, you can just run around the tree and keep hitting the foe whenever the time's right. This added maneuverability isn't really found with a mouse.

Using your abilities or casting spells is just as simple as it is with a mouse and keyboard, in my opinion. You can bind whatever you want to a button or combination of buttons. Just look in the general direction and press. The standard abilities bar can be augmented by holding down Left Trigger. This gives you even more slots to bind abilities to.

The revamped user interface really doesn't live up to the hype on consoles, but the fact that you directly control your character with the thumbsticks is a blessing. You're also given a few extra inventory boxes for good measure. In my opinion, the controls are the most prominent changes that improve quality-of-life the most. As you know, the inventory still requires using a cursor and its few extra slots don't dramatically ease hauling loot. You'll still have to make a number of trips back to town to sell or store gear. 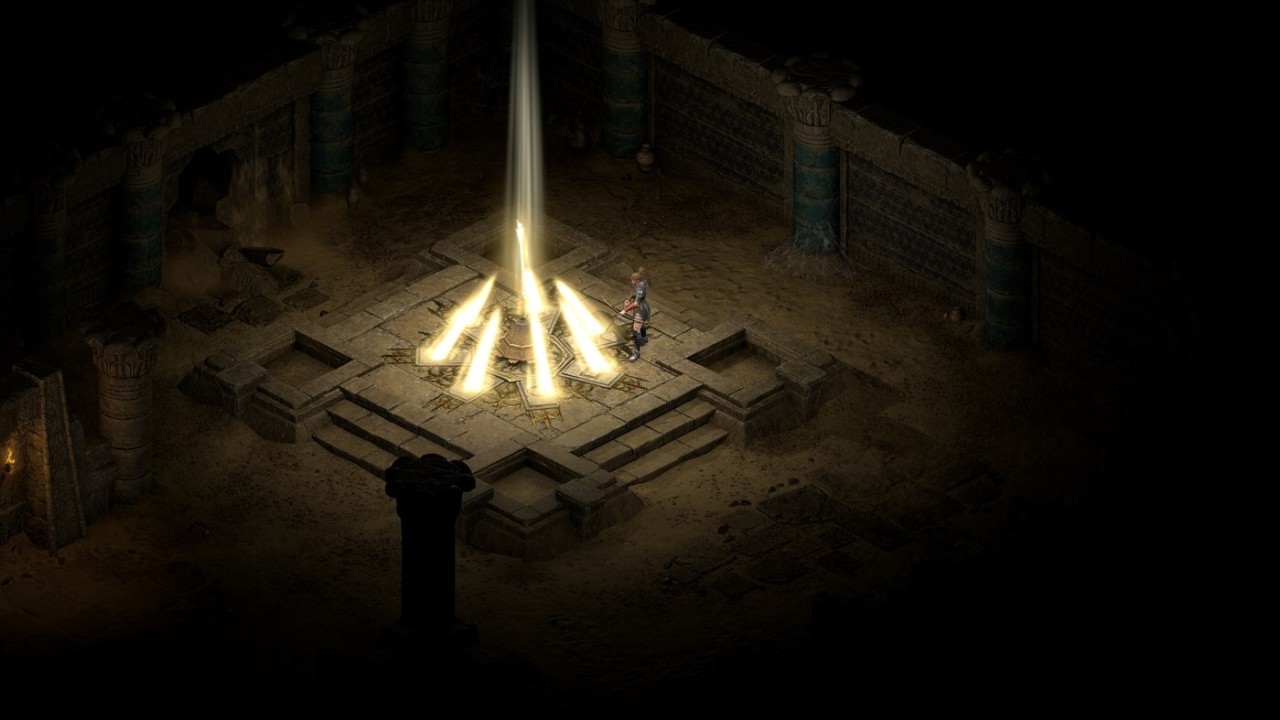 Diablo II: Resurrected features online and offline modes. As mentioned earlier, Offline is the single-player setting and you can take on endless enemies on your own. However, if you choose to create an "Online" character, the difficulty goes up a little, but you can team up with more than half a dozen players to help you along the way. I'm positive that all of them can hire mercenaries, so you essentially end up with a small army by the time you take on Diablo.

Aside from the launch day login problems, Diablo II: Resurrected servers still suffer from occasional rubberbanding — you move in one direction and suddenly you're teleported back several feet to where you once were. I plugged in the Xbox Series X directly to the modem and it still exhibited the same problem on a 1Gbps connection. Hopefully, Blizzard and Vicarious Visions have a fix in the works because it can lead to an untimely demise if you're playing online. 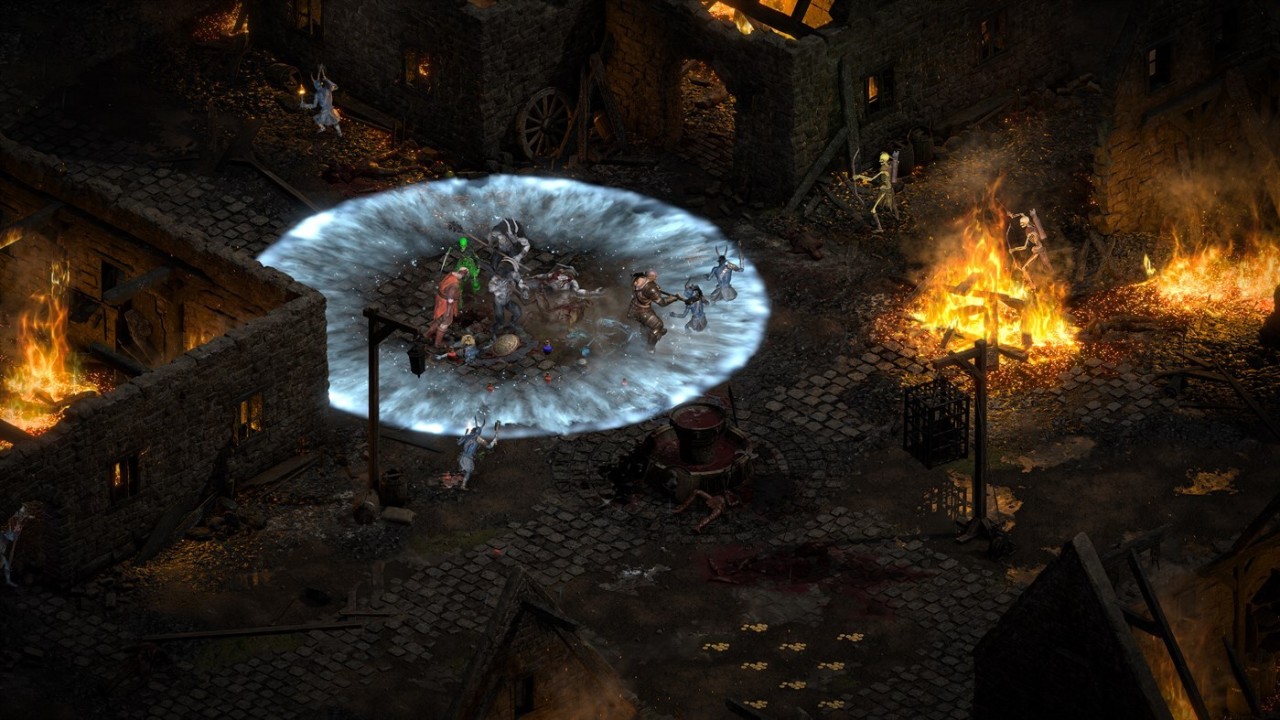 Overall, Diablo II: Resurrected still holds up surprisingly well even after all these years. It's a must-play title. The story is captivating, and slowly unraveling the mystery behind the Dark Wanderer is quite thrilling. I just wish the teams had completely revamped the inventory system for consoles.

Diablo II: Resurrected relies on constantly finding better gear, and having to manually control a cursor to select items is tedious, to say the least. Luckily, you get used to it, as it becomes second nature after a few hours. While the game is brimming with nostalgia, and is clearly designed for those who've played Diablo II before, it should still appeal to newcomers. It's a very good remaster, but the aforementioned design choices are holding it back from greatness. The original didn't have any noticeable issues that I can recall, but it seems like the PC version is the way to go because Diablo II: Resurrected works the best with a mouse and keyboard given its inventory situation.

If controlling the inventory with a cursor seems like a dealbreaker, you should check out Diablo III due to its radial menu. The game brings you up to speed rather quickly with what happened in Diablo II and its expansion.

Diablo II: Resurrected features cross-progression so you can experience it on any platform and retain your progress. Unfortunately, you'll have to spend another $39.99 to buy it on another system.

It'll take players around 20 hours to complete Diablo II: Resurrected's campaign, but if you're looking to slay demons on the highest difficulty there is, then it's probably going to be around 150 hours of playtime. It's a substantial game with addictive gameplay. Despite the problems, I can't recommend it enough because it's just so much fun! You don't even realize how quickly the hours fly by.

You can purchase Diablo II: Resurrected from the Microsoft Store or the platform of your choice for $39.99. The game was released on September 23, 2021 on Xbox One, Xbox Series X|S, PlayStation 4, PlayStation 5, Nintendo Switch, and PC.

Blizzard Entertainment provided a review code for Diablo II: Resurrected. The game was tested on an Xbox Series X console.