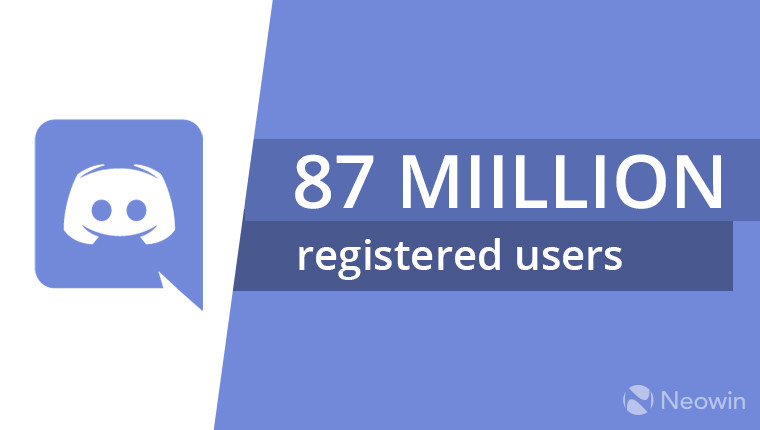 Gaming-focused VoIP client Discord was launched in March of 2015, and as of May, 2017, it reached the 45 million registered users milestone. However, the speed of adoption hasn't slowed down, with the company announcing that the user base has nearly doubled in the seven months since, settling in at 87 million.

In light of such a large pool of users - which Discord expects to grow to 90 million by the end of the year - a few of the upcoming features have also been mentioned.

Back at the beginning of October, video chat and screen sharing came to the client, with the former supporting up to 10 people simultaneously. Screen sharing will be getting some improvements next year, which will enable you to share audio along with video. Speaking of audio, there will also be improvements to the quality and stability of voice calls and the in-game overlay. Discord is also making some improvements to its system, to ensure that uptime is kept consistent and avoid problems like the major outage from mid-November.

A feature called Priority Speaker - present on Mumble and TeamSpeak - is also being worked on, with no clear date of launch as of yet. For those not familiar, Priority Speaker allows for the voices of other users to be lowered in volume whenever the person prioritized is speaking. This is a useful feature for multiplayer situations in which a team leader needs to give out instructions. These instructions would otherwise be difficult to hear, especially if the dedicated channel or the voice call has a lot of users.

Another recently added feature that will get expanded support is Rich Presence. If devs choose to integrate their game into this Discord capability, it will allow friends to see which game you're playing and for how long, what score you have or what boss you're fighting, all by clicking on your profile. Additionally, you also get controls to join a friend's multiplayer party or spectate their gameplay session.

You can grab Discord at this link. It works on Windows, macOS, Linux, iOS, Android or in a browser.