Despite extensive campaigns and driver education programmes around the world, it’s a sad fact that many motorists continue to use their cellphones while driving. Modern smartphone platforms avail drivers of the means to interact with their handset through voice commands while on the move, and those who feel they can’t rely on such systems for whatever reason are encouraged to pull over in a safe place to do what they need to on their phones while stationary.

The reasoning behind this is simple, of course – directly interacting with your device requires that you take your eyes off the road, which immediately increases the risk of an accident. Figures from the US National Highway Traffic Safety Administration, quoted by the US Federal Communications Commission (FCC), show that distraction was the cause of 18% of all fatal crashes in 2010, resulting in the deaths of 3,092 people and injuring over 416,000. The FCC also cites a study by the Virginia Tech Transportation Institute, which found that text messaging while driving creates a distraction that makes the risk of a crash 23 times worse.

That message, sadly, doesn’t always get through. On April 3, 22-year-old Alexander Heit, a student of the University of North Colorado, was sending a text message from his iPhone to a friend, while driving to Greeley, CO. Before he completed his message, he realised that his car had drifted across the road towards oncoming traffic; attempting to get back on track, he jerked the steering wheel, but the car flipped over and crashed. 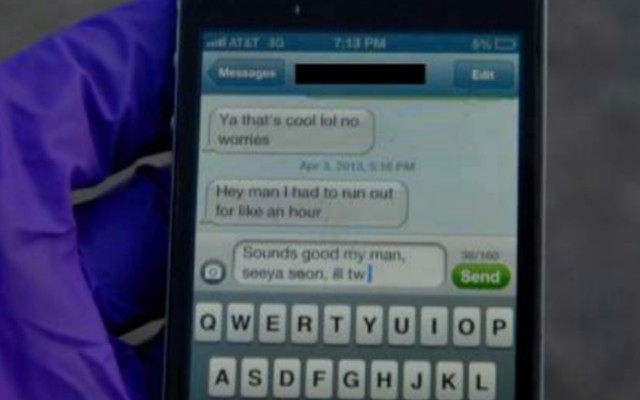 Heit died shortly after the crash, but his parents and local police are determined to ensure that something good comes of the tragedy, releasing a photograph of the unfinished text message on his phone as a sad but potent reminder of the foolishness of using one’s phone while driving.

“I can’t bear the thought of anyone else having to go through something like this,” Alexander’s mother, Sharon, said in a statement. “In a split second, you could ruin your future, injure or kill others, and tear a hole in the heart of everyone who loves you.”

Greeley Police Chief Jerry Garner underlined the importance of not taking the risk, telling The Greeley Tribune: “Unfortunately, when we think to ourselves ‘I’ll just do it this one time’, we are fooling ourselves. This ‘one time’ may be the only time… If this tragic, senseless accident can be a learning experience for others, perhaps others will be saved.”

Source and image: The Greeley Tribune | via BBC News