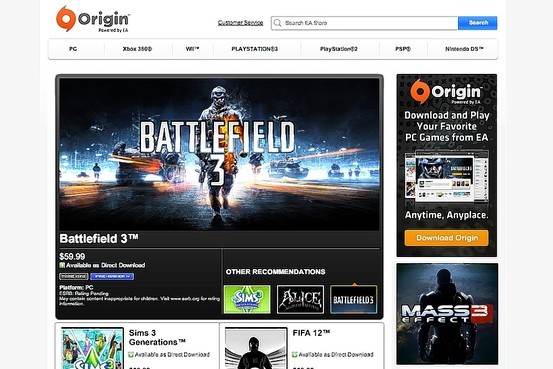 Publisher Electronic Arts is launching a new digital download store for its PC games starting today. The Wall Street Journal reports that the new download store will be called Origin and will feature over 150 games from EA's library of PC game titles. Origin will include a client application that will allow its users to purchase and download the game. However Origin is also supposed to have some other social networking features. These will include allowing "gamers on a variety of devices (to) broadcast messages to online friends when they defeat online opponents or accomplish other gaming goals."

EA's CEO John Ricitiello said in an interview that Origin will be an important part of the company's goals to move more of its game revenues to Internet purchase rather than have gamers just pay for games via retail stores. Even if gamers decide not to purchase their EA games via Origin, the story states that gamers "will be able to use it to create profile pages that record all of their scores and other progress on EA games and to establish Origin friend lists based on their friend lists on Facebook and other social networks."

At least one upcoming EA game will be a big part of the company's plans for Origin. The story states that Star Wars The Old Republic, the upcoming and long awaited MMO title from developer BioWare, will be sold via digital download only via the Origin service (the game will still be sold in retail stores).