An early build of Windows 7 SP1 has leaked to file sharing sites this week, indicating that Microsoft is on target to ship the update later this year.

The build, 6.1.7601.16537.amd64fre.win7.100327-0053, appears to be a recent compile from March 27. Early reports, from enthusiast site GeekSmack, indicate the build is quick to install but it's not clear whether it includes the promised USB 3.0 support or enhanced Bluetooth and Wi-fi stacks.

Microsoft has sold more than 90 million Windows 7 licenses to date making it the fastest selling operating system in history. Microsoft released Windows 7 on October 22, 2009. The operating system has received praise from consumers, businesses and the media. In November 2009, Windows 7 managed to surpass Apple's Snow Leopard market share in just two weeks. In early February it was revealed that Windows 7 had reached 10% market share in just three months.

Screenshots of a Windows 7 post RTM build showed up on the web in February, fueling speculation that Microsoft is compiling early Windows 8 builds. The successor to Windows 7 will likely be available in 2011 as an ex-Microsoft worker penned July 2011 as the RTM date for Windows 8.

Microsoft is currently readying the first Service Pack for Windows 7. A beta version is expected in June with a public release in September this year. 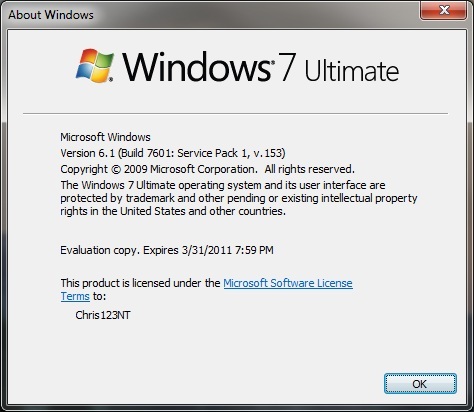