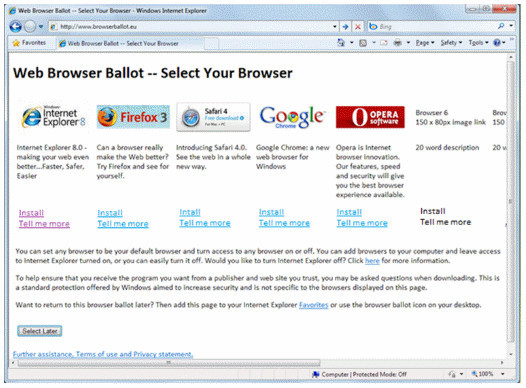 As promised earlier this week, the European Union's antitrust regulators in the European Commission have indeed fined Microsoft to the tune of 561 million euros, or $732 million, due to Microsoft's violations of a 2009 anti-trust agreement with the EU.

In 2009, Microsoft signed an agreement with the EU that would give owners of Windows-based PCs in Europe a required ballot that would display many different web browsers to download, including Microsoft's own Internet Explorer. This was due to the EU's opinion that Microsoft's IE web browser was being given special treatment.

Microsoft did admit in July that a number of Windows 7-based PCs did not display the required web browser download ballot in Europe for a lengthy period of time. The company said a software glitch was to blame and has since sent out an update to the affected Windows 7 PCs to restore the menu. It has also said it will continue to show the ballot screen beyond the previously agreed to time period.

In today's press release, the European Commission noted this was the first time that it has fined a company for not complying with a previous antitrust agreement. Commission Vice President in charge of competition policy Joaquín Almunia stated:

Legally binding commitments reached in antitrust decisions play a very important role in our enforcement policy because they allow for rapid solutions to competition problems. Of course, such decisions require strict compliance. A failure to comply is a very serious infringement that must be sanctioned accordingly.

Update: Microsoft has released a brief response to the EU fine:

We take full responsibility for the technical error that caused this problem and have apologized for it. We provided the Commission with a complete and candid assessment of the situation, and we have taken steps to strengthen our software development and other processes to help avoid this mistake – or anything similar – in the future.