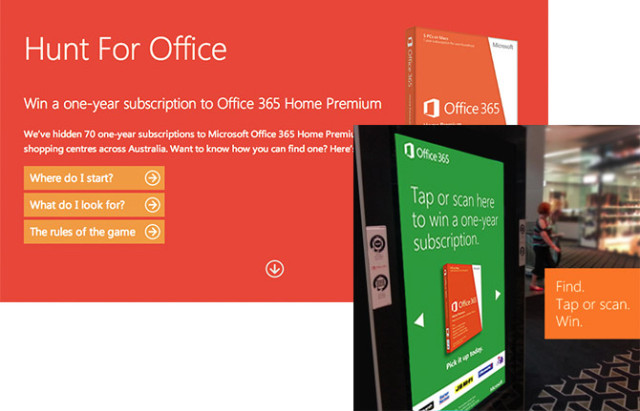 If you live in Australia and own a NFC capable smartphone, start heading toward any major city to look for "hidden" copies of Office 365 Home Premium subscriptions embedded within digital ads in select shopping centers – valued at $119, all you need to do to win is tap on the ad.

Microsoft Australia has 34 digital advertising screens located in major shopping centers across Australia. Their exact location in each is not disclosed as participants are required to hunt for the ad on their own.

Once an ad has been located, the first five people each day over the two-week campaign - which started yesterday - who either tap the NFC tag or scan the QR code and complete the registration form will instantly win an Office 365 subscription which is sent to their email.

As istartedsomething points out, it's not the first time NFC has been used in advertising, Samsung gave away music to Galaxy SIII users last year using a similar method.

We have to hand it to Microsoft Australia, not only for the "modern" method of advertising, but also the value of the giveaway, which is none too shabby!