The European Commission (EC) has delivered the preliminary findings of its investigation into concerns surrounding Google's dominant market position, and its actions to protect and further its interests in the mobile market. Commissioner Margrethe Vestager said today that it is the view of the EC "that Google has abused its dominant position" in the market.

Vestager said at a press conference today that "Google pursued an overall strategy on its devices to protect and expand its dominant position in mobile and internet search".

She noted that the company had "decided to build Android as an open source operating system", allowing companies to customize and 'fork' the OS as they desired, but she also stated that "not all of Google's business practices are as open or fair". 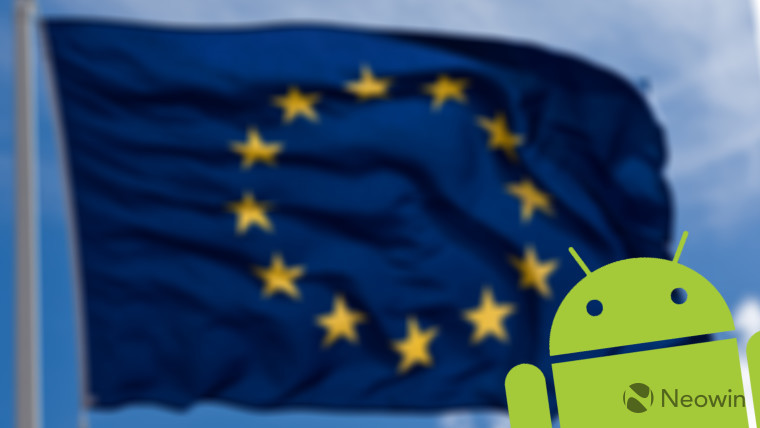 The European Commission has sent a Statement of Objections to Google outlining its preliminary findings, offering it - and its parent company, Alphabet - the opportunity to respond to the concerns raised ahead of a final judgement. It points out:

The Commission's preliminary view is that Google has implemented a strategy on mobile devices to preserve and strengthen its dominance in general internet search. First, the practices mean that Google Search is pre-installed and set as the default, or exclusive, search service on most Android devices sold in Europe. Second, the practices appear to close off ways for rival search engines to access the market, via competing mobile browsers and operating systems. In addition, they also seem to harm consumers by stifling competition and restricting innovation in the wider mobile space.

The EC alleges that Google has breached European Union antitrust rules by:

It added that it is "also concerned that these practices affect the ability of competing mobile browsers to compete with Google Chrome, and that they hinder the development of operating systems based on the Android open source code and the opportunities they would offer for the development of new apps and services." 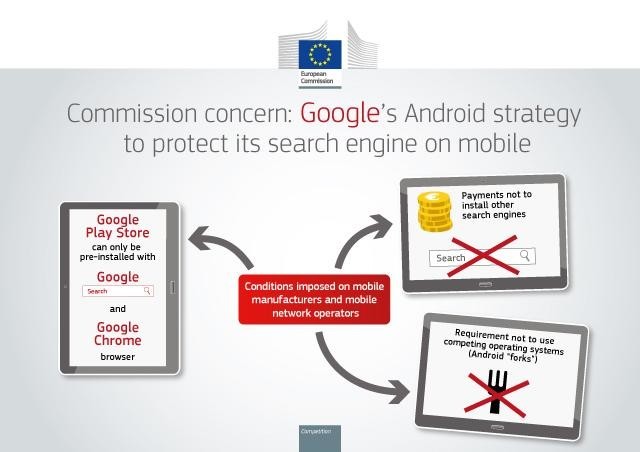 Below is a detailed summary of the main concerns that led to the EC's findings today:

The Commission's investigation showed that it is commercially important for manufacturers of devices using the Android operating system to pre-install on those devices the Play Store, Google's app store for Android. In its contracts with manufacturers, Google has made the licensing of the Play Store on Android devices conditional on Google Search being pre-installed and set as default search service. As a result, rival search engines are not able to become the default search service on the significant majority of devices sold in the EEA. It has also reduced the incentives of manufacturers to pre-install competing search apps, as well as the incentives of consumers to download such apps.

Similarly, in its contracts with manufacturers Google also required the pre-installation of its Chrome mobile browser in return for licensing the Play Store or Google Search. Thereby, Google has also ensured that its mobile browser is pre-installed on the significant majority of devices sold in the EEA. Browsers represent an important entry point for search queries on mobile devices. Thus, by reducing manufacturers' incentives to pre-install competing browser apps and consumers' incentives to download those apps, competition in both mobile browsers and general search has been adversely affected.

Android is an open-source system, meaning that it can be freely used and developed by anyone to create a modified mobile operating system (a so-called "Android fork"). However, if a manufacturer wishes to pre-install Google proprietary apps, including Google Play Store and Google Search, on any of its devices, Google requires it to enter into an "Anti-Fragmentation Agreement" that commits it not to sell devices running on Android forks.

Google's conduct has had a direct impact on consumers, as it has denied them access to innovative smart mobile devices based on alternative, potentially superior, versions of the Android operating system. For example, the Commission has found evidence that Google's conduct prevented manufacturers from selling smart mobile devices based on a competing Android fork which had the potential of becoming a credible alternative to the Google Android operating system. In doing so, Google has also closed off an important way for its competitors to introduce apps and services, in particular general search services, which could be pre-installed on Android forks.

Google has granted significant financial incentives to some of the largest smartphone and tablet manufacturers as well as mobile network operators on condition that they exclusively pre-install Google Search on their devices.

Google has thereby reduced the incentives of manufacturers and mobile network operators to pre-install competing search services on the devices they market. In fact, the Commission has evidence that the exclusivity condition affected whether certain device manufacturers and mobile network operators pre-installed competing search services.

Vestager said today that Google's dominance of the mobile and search markets - over 90% in many European nations - was not the main source of concern, and not a driving force behind the investigation. "In Europe, you can be big, you can grow, you can be dominant," she said. "The one thing you can't do is abuse your position."