Evernote has announced an overhaul to its pricing structure, which will see the cost of its paid-for plans increase by 33%, while considerable restrictions are being imposed on its free service. The changes are immediate for newcomers, but Evernote says that "current subscribers and Basic users... will have some time to adjust before the changes take effect".

Anyone signing up for a new, free 'Basic' plan will no longer be able to synchronize their notes between an unlimited number of devices, which was previously available for users of the free service. Instead, Basic accounts will now be limited to just two devices, "such as a computer and phone, two computers, or a phone and a tablet", in addition to syncing with the web.

Basic users only get 60MB of new uploads per month, but they'll now also get the ability to add a passcode lock on Evernote mobile apps - a feature that was previously restricted to paid plans. 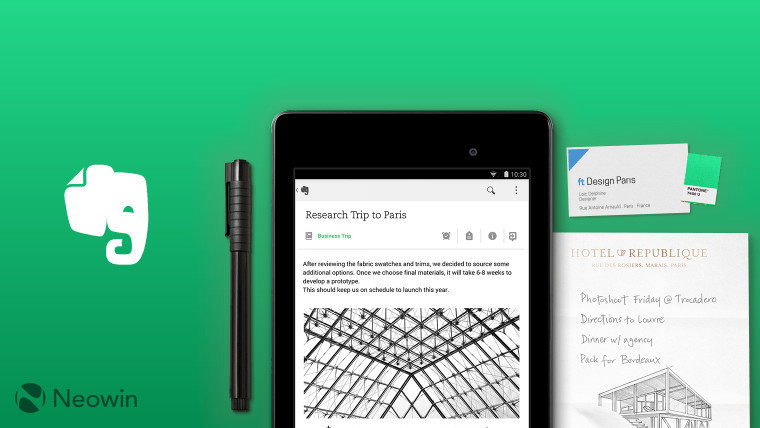 Both of the paid plans allow users to sync their notes across an unlimited number of devices - but both are going up in price too.

The Plus package offers the same basic features of the Basic plan, but comes with 1GB of new uploads per month, and adds offline access to notebooks and the ability to forward emails into Evernote. Previously priced at $2.99 a month, this is now rising to $3.99 (or $34.99 a year).

Evernote Premium has everything in the Plus plan, but includes 10GB of new uploads each month, along with additional features such as searching for text in PDFs and Office documents, PDF annotations, note history, and business card management. Previously available for $5.99 a month, this is now increasing to $7.99 (or $69.99 a year).

The company said that introducing these changes was a tough call:

We don’t take any change to our pricing model lightly, and we never take you for granted. Our goal is to continue improving Evernote for the long-term, investing in our core products to make them more powerful and intuitive while also delivering often-requested new features. But that requires a significant investment of energy, time, and money. We’re asking those people who get the most value from Evernote to help us make that investment and, in return, to reap the benefits that result.

An FAQ page about Evernote's changes is available here.

The new limits on the Basic plan are quite restrictive compared with what was previously offered, and while they won't affect existing customers immediately, it's surely just a matter of time before they do.

And with the considerable price increases on the paid plans, it's worth noting that Evernote Premium, at $69.99 a year, now costs the same as a one-year Office 365 Personal subscription.

Microsoft's OneNote note-taking app is free to download, use and sync between an unlimited number of Windows, iOS, Android, Amazon, Chromebook and Mac devices - so you could just switch to OneNote from Evernote and save a big chunk of cash. But if you're considering paying for the Evernote Premium subscription, bear in mind that for the same price, you'd not only get OneNote on all of your devices, but you'd also get the full Office suite on 1 PC or Mac, 1 tablet and 1 phone, along with 1TB of online OneDrive storage, if you opted for an Office 365 Personal subscription instead.

Microsoft also offers a free tool to help users migrate their Evernote notes to OneNote. You can get a quick overview of that tool in the video below: