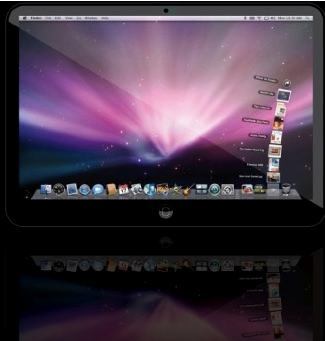 The New York Times seems to think that Apple is due to re-enter the living room, this time in a big, big way. Apple isn't known as a true player in the home media sector. The company currently offers Apple TV, which is virtually a stripped down Mac Mini with TV connections and an clunky OS. Steve Job has stated in the past that he would like to see "4 pillars" make up the Apple business model.

Apple has apparently hired a swarm of new staff, only they haven't placed them in any of their current project groups. The new hires are mostly television and broadcast professionals, along with those that specialize in design for the television industry. This vaguely points to an all new product rather than another reiteration of the current Apple TV.

Common speculation states that rather than provide a new topless solution, Apple intends to create an all-in-one device for the living room. This would encompass a television with an specially developed version iOS preloaded. Cross-compatibility with current apps is also forecasted, although developers would have to adapt their current software to the new size format. This would allow users the opportunity to utilize services such as Netflix or Hulu. If Apple enabled streaming from the iTunes store as well, they might just have a true winner on their hands.

Many have tried, but most have failed to enter the the direct-to-living-room streaming market. With a completely integrated solution, Apple might be able to ride their iOS package right into the center of living rooms everywhere; with this product, Apple may finally have the leverage they need to successfully dominate the sector. They'll need it as Google is also anticipated to enter the market with "Google TV".