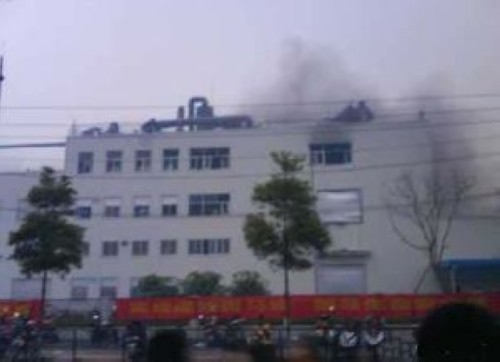 Several Chinese news sources are reporting on an explosion at a Foxconn plant in the Chinese city of Chengdu, Sichuan province. The accident appears to have been the result of a lightning strike that struck the building and caused a dust explosion, according to the Chinese news site 21st Century Business Herald. An evacuation was triggered over reports of airborne toxic smoke as a result of the explosion. At the time of the explosion, there were hundreds of employees inside the building. The building is currently off-limits due to concerns of a second explosion. Unfortunately, there have been two casualties and at least 16 injuries have been reported. Three of the 16 injuries were reported as serious.

The accident occurred in the A05 building, which also houses the production line for iPad 2s. According to micgadget, the accident occurred at 7 PM local time, and affected the second, third, and fourth floors of the building. Police have ruled out any human error in the causes of the explosion. It is unknown at this time whether this accident will trigger a delay in global iPad 2 shipments. For the time being, our thoughts are with the victims of this unfortunate accident.

Foxconn officials have provided Gizmodo with the following official statement regarding the accident:

We can confirm that at approximately 7 pm on May 20, there was an explosion at our Chengdu campus. At this point, we can also confirm that there were two fatalities with injuries to 16 other employees. We are working with medical officials to provide treatment to the injured employees and we are working with government and law enforcement officials to contact the families of all employees affected by this tragedy.

The situation has been brought under control by the fire department and the cause of this explosion is being investigated by local police officials. Foxconn is cooperating fully with that investigation.

Production has been suspended at the site of the explosion until the completion of the investigation. The safety of our employees is our highest priority and we will do whatever is required to determine and address the cause of this tragic accident.

There are a few videos of the incident, courtesy of micgadget: