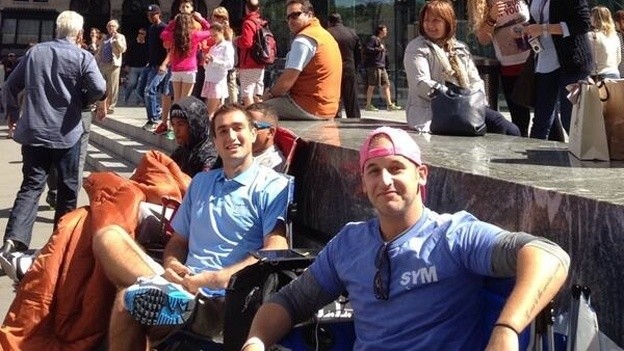 Diehard Apple Fans are notorious for braving New York’s harsh weather for many days, or even weeks, in order to be the first to get their hands on the latest release products.

So it comes as no surprise that people are already lining up outside Apple’s Fifth Avenue store in New York to be the first to get their hands on a new iPhone, a whole two weeks before the anticipated launch date. Representatives from SellYourMac arrived at the New York store last Friday expecting to be first in line for the event, but were shocked to find a group of fanatics who beat them to it.

One person who queued last year for the iPhone 5, as shown in the awkwardly performed interview below, wasn't even sure what she was queuing for, as long as she "doesn't get scammed on the Internet" is good enough reason to be queuing!

The Guardian reports that Apple will announce the release date of the new iPhones tomorrow in Cupertino, California. The launch will also be shown as a live stream event to Europe, and demonstrated to a select group of people in China; this move comes as Apple tries to break into the huge smartphone market in East Asia, currently dominated by Samsung with the launch of the budget friendly iPhone 5C.