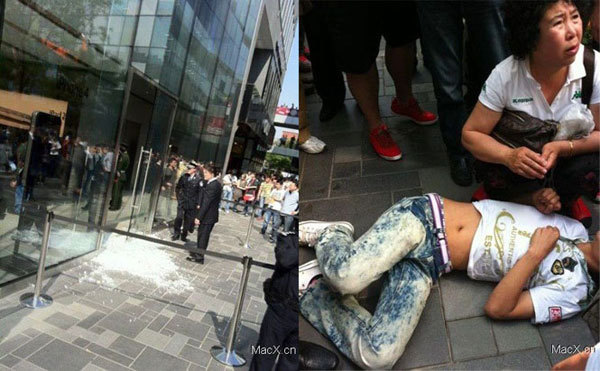 While the details of this incident remain scarce at this point, it appears an incident has occurred at the flagship Sanlitun Apple Store in Beijing, China during the rush to purchase the newly launched iPad 2. It is difficult to make out details from poorly translated reports, but it seems that some customers were so frustrated in queues outside the store to the point they have lashed out at employees.

For some bizarre reason, the “foreign” Apple Store employees were armed with “iron rods” and proceeded to brawl with customers in the agitated queue, injuring four customers seriously enough that they had to be admitted to hospital. Other damage included a destroyed glass door to the Apple Store, which is easily fixable unlike some of the wounds sustained to customers as shown in pictures 9to5mac obtained.

It is unclear what exactly caused the conflict, but what could be ascertained from translated reports indicates the possibility of a stock shortage or extremely long queues and hot weather attributing to the unrest.

Long and frustrating lines at Apple product launches are common, especially at flagship stores such as the New York 5th Avenue glass cube, however to see Apple Store employees armed and ready to fight customers at a sign of unrest would be very unusual in a United States (or any other Western based) store.

Update: A new report has emerged that claims resellers for the white iPhone 4 (not iPad 2) were told to wait in line and prevented from entering the store. They got agitated, annoyed and broke the glass door worth US$46,000, which led to a non-Chinese employee attacking the resellers with a metal club; they were then hospitalized