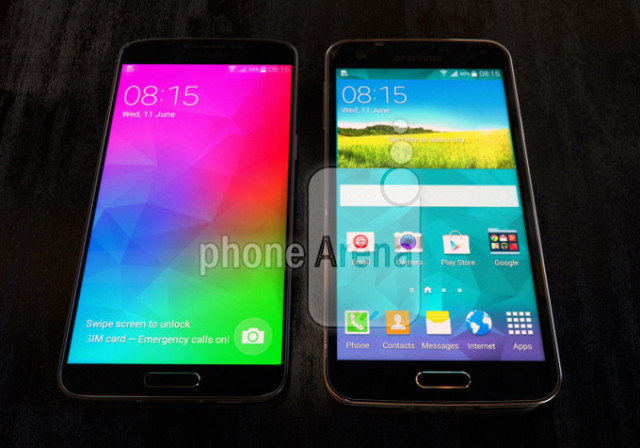 Alleged images of Samsung's upcoming flagship smartphone, the Galaxy F, have leaked yet again but there's still no information about the device's launch.

The top image posted by PhoneArena, compares the Galaxy F with the Galaxy S5. In the picture, the thinner bezel and slightly larger 5.2-inch screen can be noticed clearly, confirming some of the rumours about the display. The resolution of the screen is alleged to be 2540x1440 but it cannot be ascertained by just looking at the image. Some of the other hardware specifications rumoured for the device include a Snapdragon 805 quad core CPU, 3GB of RAM and a Qualcomm MDM9635 multimode modem,​ that is capable of 255Mbps download speeds over 4G LTE.

Evleaks also posted a press shot of the gold coloured Galaxy F earlier today as a follow up to his earlier post from last week, which showed the silver Galaxy F. The smartphone is expected to be a premium variant of the Galaxy S5 but with the number of hardware changes alleged to be part of the device, it might as well be a parallel series for people seeking better quality devices.