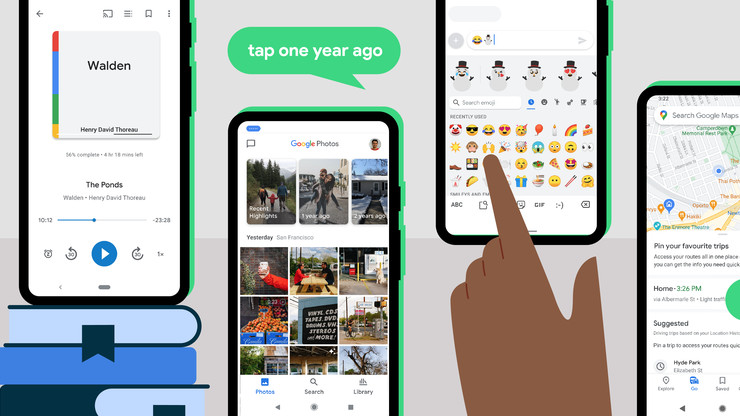 Google has announced a handful of new features that are making their way to Android phones now or in the coming weeks. These features are generally related to specific apps, but they may be useful all the same.

First off, Gboard is getting an update that improves the Emoji Kitchen feature. This allows users to combine multiple emoji to combine visual elements from two emoji to create a custom one. With the new update, the number of possible combinations will go from "hundreds" to over 14,000, plus the combinations will automatically be suggested after inserting two emoji in a message. It'll also be possible to select the same emoji twice to get suggestions with more intense emotions. This update is currently available in Gboard's beta release, and will be coming to devices running Android 6.0 or newer over the next few weeks.

Google is also making the Voice Access app more widely available, after it was released for Android 11 devices. The app lets users control their device using only their voice, and it can now add labels to the screens of apps, so voice can be used to navigate them more easily. If you haven't yet, you can download the app here and join the beta program to try the latest features.

On Google Maps, a new Go tab is rolling out in the coming weeks, and it provides quick shortcuts to places you visit frequently. You can add multiple locations to this page to get directions and traffic information more quickly. And, once you're on the road, Google is also making Android Auto available in more countries in the coming months.

Next up, an update to Nearby Share is soon going to add the ability to share apps with nearby users. This works even without an internet connection, and it can be useful to help a friend set up a new app in a pinch. This will be coming in the next few weeks.

Finally, for audiobook fans, Google is releasing a tool for publishers that enables automatic conversion of text books to audio format, so readers (or rather, listeners) don't need to wait for a book to be turned into an audiobook the usual way. This tool is available in beta for now and will roll out to all publishers early next year.