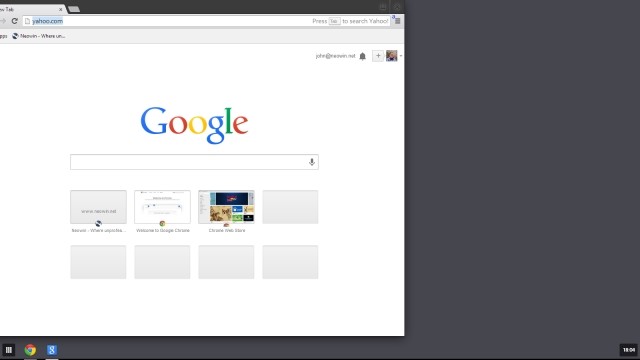 Microsoft and Google have been at odds in recent months, particularly regarding mobile devices. Google refuses to make new Windows 8 and Windows Phone apps, and Microsoft is reportedly asking HTC to offer Windows Phone versions of its Android smartphones. Now Google is looking to take advantage of the Metro environment in Windows 8 with a new version of its Chrome browser.

The developer version of Google's Chrome browser now allows users to run the application in Windows 8's Metro environment with an interface similar to the company's Internet-enhanced Chrome operating system. The similarities largely end in appearance, however, as the only major feature of the operating system available with the browser's Metro environment is an application bar that is essentially nothing more than a glorified bookmark bar, opening websites.

Multiple browser windows can be opened, but the Chrome operating system's Linux kernel is obviously absent, as are any file management capabilities and significant offline features.

The Verge, which first published the news, claims the "functionality is identical to Chrome OS," though many of the operating system's more unique features – such as its quick booting and user management – are absent. Icons can't be placed on the "desktop" the browser uses, background images can't be set, taskbar icons can't be moved and the Chrome OS transparent interface is also unavailable.

The current stable version of Google's Chrome browser allows users to launch it in the Metro environment, though the developer version simply adds the ability to launch multiple browser windows (and their own tabs) and a taskbar that can only open website links. The faux taskbar is essentially a larger version of Google's already-available Chrome app launcher for Windows.

It's possible the new features could entice users to Google's operating system, though the larger benefit is the emphasis of Google Apps – already featured noticeably in the desktop version of Chrome, though not as prominently as the Metro version.

Source: Google Chrome via The Verge