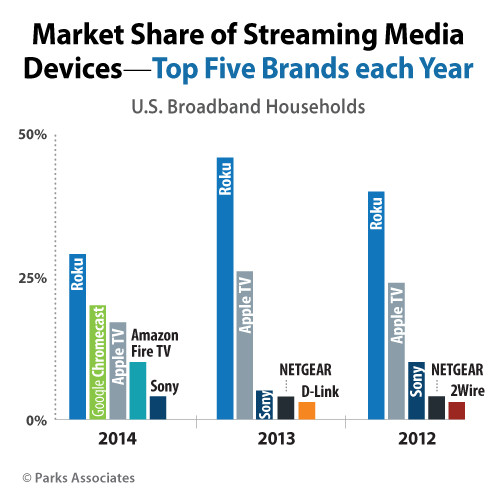 Google's Chromecast has overtaken the Apple TV to become the second most used streaming device in US households.

The Chromecast was first introduced in July 2013 and has been slowly but consistently gaining market share. The device allows the user to send media from a device to a large screen, such as TV. Devices that run Android and Chrome can take advantage of the Chromecast, with high-profile streaming services such as YouTube and Netflix being supported. It is perhaps the open nature (due to Google quickly releasing an SDK for developers) of the Chromecast which results in the huge amount of services that support the device; this large selection makes the device very attractive to consumers.

With 17% of the market, the Apple TV still holds a significant proportion of the market. One of the reasons for the high market share is the ease of use of the device, allowing setup in just a couple of minutes. Similar to Chromecast, media can be sent to the device from an iOS device or a Mac, but the system is not nearly as open as the Chromecast, supporting a far narrower range of services (major services such as Netflix are supported). The device is one of the only ways to put iTunes content such as movies on a TV, at least easily, so it's highly attractive for existing Apple customers.

Roku continues its lead at number one, with 29% of the market. Roku is unique out of the three market leaders as it offers multiple devices. This allows it to reach a higher percentage of the market as they would appear to offer something for everyone. The Streaming Stick is very similar to the Chromecast whilst the three Roku Streaming Players are similar to Apple TV. Roku devices support a huge list of services (more than 1800 in the US) and they are well designed, so they are attractive from both a functional and aesthetic point of view.

Streaming is continuing to grow in the US and it doesn't look like it is going to slow down any time soon. It is encouraging to see a high number of competing products in the marketplace, which can only be good for consumers.