If you've ever been to a restaurant in a foreign country and found yourself lost while looking at the menu, you're not alone. Fortunately, Google is aiming to alleviate these awkward situations with their latest update to Google Goggles. 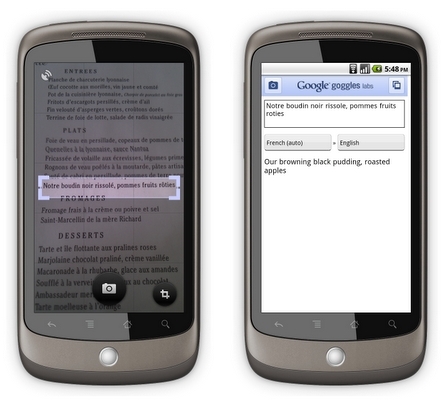 Goggles v1.1 is an application for Android devices that allows you to do image based Google searches by simply snapping a photo of what's in front of you. According to the Google Mobile Blog, the latest release of Goggles will now translate foreign text for you. Currently, the system is able to read English, French, Italian, German, and Spanish. However, it can translate those five into many others. Eventually, Google plans to support non-Latin languages, including those that are right-to-left and symbol based.

Other features of the 1.1 release include:

This update is available in the Android Market for devices running Android 1.6 and above. To download it, use the QR code below, or search for Google Goggles in the the Market's search box. To see the new translate function in action, check out this video.

Images all taken from the Google Mobile Blog.