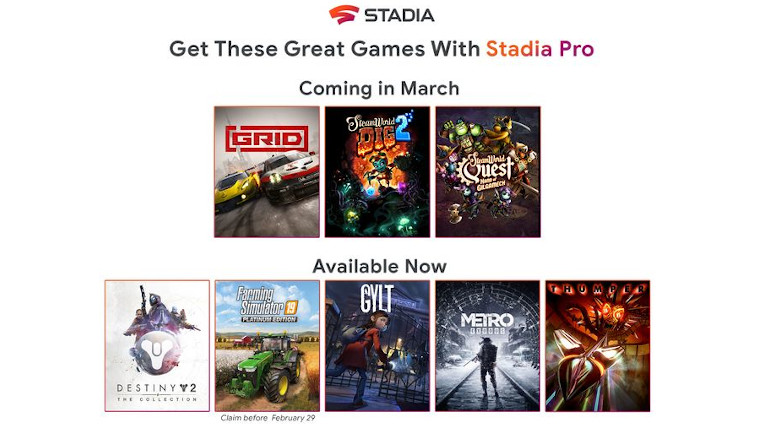 Google has announced that players with Stadia Pro subscriptions will be able to claim GRID, SteamWorld Dig 2, and SteamWorld Quest for free as part of their Pro membership. Additionally, new Stadia Pro deals have been announced for several titles such as Dragon Ball Xenoverse 2 which has a 50% discount. Google also mentioned that Spitlings, a game first on Stadia, is now available for $14.99.

Of the three free games, the SteamWorld titles are brand new to the Stadia platform. The other title, GRID, includes a Stadia-exclusive forty-player Endurance Mode. These three titles join the other free Stadia Pro titles Destiny 2, Farming Simulator 19 Platinum Edition, Gylt, Metro Exodus, and Thumper. According to Google, however, Farming Simulator 19 Platinum Edition will drop off the list on February 29 so be sure to claim it before then.

If you’re a member of Stadia Pro, the current deals on offer include:

Finally, if you like indie titles, Spitlings is now available on the Stadia store for $14.99. In Spitlings, teams of up to four have to cooperate to complete levels, if one player fails, the whole team does too.