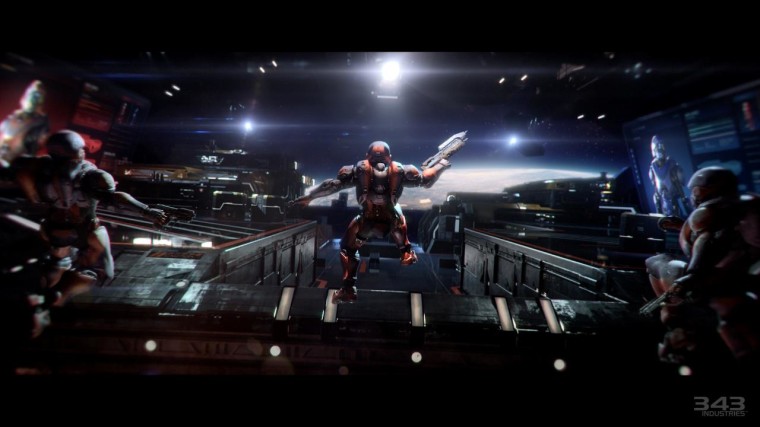 Halo is a franchise that needs no introduction. The series single-handedly proved that shooters weren't meant for just the PC gamers and also served as the catalyst for Microsoft's original Xbox console. Now, 13 years later, Halo is taking its boldest steps forward in an attempt to reclaim the iron throne that sits atop the FPS genre.

343 Industries, Halo's development studio home after being handed off by Bungie with the studio's split from Microsoft, opened up a small early access window to the Halo 5: Guardians beta that is promised to those that purchased a copy of Halo: The Master Chief Collection. Those that received invites to the early play session were allowed to play the team deathmatch variant "Slayer", a 4v4 team race to 50 kills.

The early look is likely a chance for 343 Industries to make sure the beta period for Halo 5 doesn't suffer from the hiccups that The Master Chief Collection had with matchmaking, which lead to 343 having to offer a future port of Halo 3: ODST for free as a peace offering for those affected. The good news is that the 3-day period showed mostly stable conditions, so if you're planning on participating in the upcoming beta, you shouldn't have to worry about a repeat of recent Halo history here.

I found Halo 5 to be a noticeable step forward for a gaming franchise that has stayed closer to home with each release as opposed to radically changing its formulas. After recently playing through a good portion of The Master Chief Collection and jumping into the Halo 5 beta, it's easy to see and feel the difference between the Halo that was and the Halo that will be. This is mostly attributed to the fact that there's a lot happening while playing Halo 5, and the beta only gives us small glimpses into what we can expect next year with a final product.

For starters, Halo 5 is faster in its pacing. This is achieved with slick visual effects while running around and with good map flow. Spartans can get to higher ground by climbing ledges (provided you're close enough), meaning more opportunities to cut down on running around and potentially getting a jump on an unsuspecting enemy.

If you quick enough, you can use the new thrust ability to perform quick dodge maneuvers to make yourself a difficult target to take down. The same thrust can be used to hold a Spartan in the air temporarily or slam you to the ground and kill a Spartan below. The abilities aren't prolonged like the pilot/exo-suit abilities you'd see in Titanfall and Call of Duty: Advanced Warfare, but they're small meaningful implementations that, when used effectively, can make/break a 1v1 moment for you.

Other noticeable changes come in the way of weapon scopes, which seemed to be on every weapon I used. The Battle Rifle, DMR, Sniper Rifle, Magnum, SMG and Assault Rifle all had scopes in the beta, which could be activated by a pull and holding of the left trigger. Aiming at range is important, and Halo 5 is taking cues from other popular shooters to modernize this aspect of its game. This is somewhat of a big change because weapon scopes were limited in previous Halo games and the button activation for scoping was typically a thumbstick click rather than a trigger pull.

The health system also sees a change, now utilizing both a player armor shield and a player health bar that must be depleted before a player is taken down (both of which are rechargeable) instead of just implementing one or the other like previous Halo games. If you're crafty enough, surviving a shootout can be easier if you pay attention to your health and feel out the warning systems that go off when you're nearing death. With the new mobility mechanics, retreating is also more viable than ever before, making survivability a small but capable tactic.

Aside from these changes, there's still the tremendous attention to balance. Weapons aren't overpowered nor do any of them seem underpowered, and all require at least some level of skill to operate effectively. A player with a Magnum can take down a player with a Battle Rifle at short-to-medium range if the player wielding the Magnum is the better shooter. Player abilities and loadouts are also equal from a game's start to finish. You don't spawn with superior weapons ever, so be prepared to fight for power weapons placed on the map.

It's still a bit early to pass any major judgments on Halo 5 since the game won't see a launch until the fall of 2015. The purpose of the upcoming multiplayer beta is to take in player feedback while the game is still moldable, something Microsoft has made a habit out of recently with Windows products. Still, it's easy to see that Halo 5 stretches the franchise in both visuals and gameplay complexity without completely sacrificing what made Halo great to begin with. For competitive shooter fans, Halo 5: Guardians is shaping up to be quite a contender for both your dollars and your extended playtime.