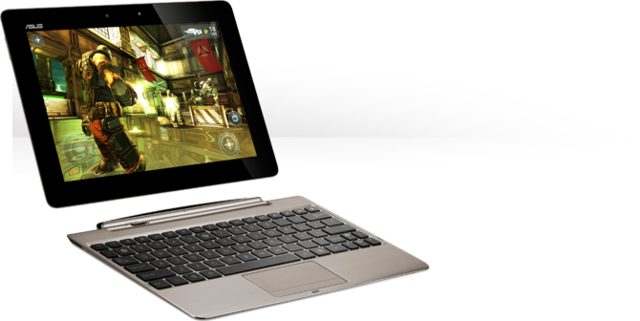 While at the NVIDIA press conference, the company made a big deal about the Asus Transformer Prime tablet. Weighing in at only 1.3 pounds and measuring a mere 0.33", the tablet boasts NVIDIA's Tegra 3 quad core processor (with an extra 5th low power "ninja core" to help improve the UI experience). While the demo of gamers playing a networked version of Shadowgun HD at the press conference looked good, we wanted to see for ourselves how smooth the experience really was.

To our surprise, once we figured out how to setup the game's network connection, it worked flawlessly. The action was smooth, the game responded to the controller just as if we were playing an Xbox 360 game, and we were able to see our opponent die on the networked tablet as we fired bullets through their torso. Overall, the gaming experience was great.

We also played with Ice Cream Sandwich on the Transformer Prime. Overall, the differences between Honeycomb and ICS isn't that obvious to a normal user. Sure, ICS has a few extra features such as the ability to shutdown an application by dragging it away from the list of running apps on the left hand side of the screen, but the overall experience is still similar. That said, the overall user experience is very good. Unlike other Android tablets, there was no noticable lag when switching between screens or launching applications (presumably due to the "ninja core" that was discussed at the NVIDIA press conference).

The ability to control the tablet via an Xbox controller is also interesting, but flawed. Moving the thumbstick allows the user to highlight the various applications, and clicking the 'X' button launches the tool. We're not sure whether this is an Asus design or a function of the operating system, but it would have been better to stick with the normal 'A' button as select. That's a minor quibble as we doubt many people will be controlling the tablet with a controller anyway.

Overall we came away from the demo very impressed and think Asus has a winner on their hands.