It's hard to believe that just 25 years ago, the World Wide Web didn't exist. Yes, the Internet had been around for a long time and online services like AOL, CompuServe and Prodigy were giving its customers a way to communicate inside their walled gardens. However, it took a member of the CERN research facility, Tim Berners-Lee, to come up with a method of communicating on the Internet that eventually turned into one of the biggest technology and business game changers of all time. 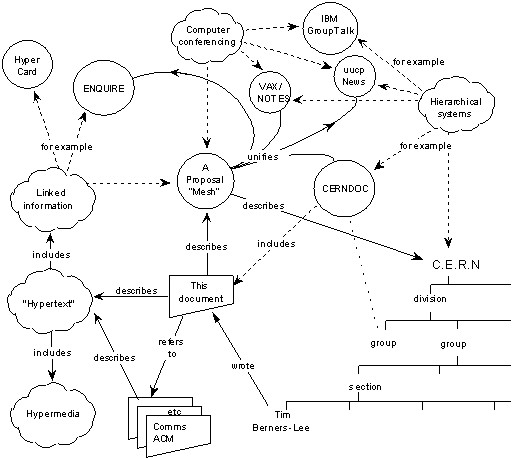 The first diagram showing what would eventually would become the basis for the World Wide Web.

On March 12th 1989, Berners-Lee published a paper called "Information Management: A Proposal" where he came up with the idea that eventually would be called the World Wide Web, accessed by programs called web browsers. At the time he wrote:

We should work toward a universal linked information system, in which generality and portability are more important than fancy graphics techniques and complex extra facilities. The aim would be to allow a place to be found for any information or reference which one felt was important, and a way of finding it afterwards. The result should be sufficiently attractive to use that it the information contained would grow past a critical threshold, so that the usefulness the scheme would in turn encourage its increased use.

It certainly did "encourage its increased use" and now we can't think of a world without the World Wide Web (certainly this very web site wouldn't exist without it). In a new interview today with CNet, Berners-Lee said while he has been impressed with many aspects of its use, such as the Wikipedia site, he is also concerned that countries and companies are still fighting for control of the web.

He also feels that the move toward mobile apps might also return the online community to a walled garden approach and has encouraged developers to create Web-based apps. However, the ultimate app would merge both platforms. He stated, "With my fitness tracker, I want it to run all the time, even offline like a native app. But every day of my workout history will have a URL and I can link my friends to it."

There's no denying that the introduction of the World Wide Web has changed the world and it's likely that it will continue to be a massive influence on the planet for some time to come.