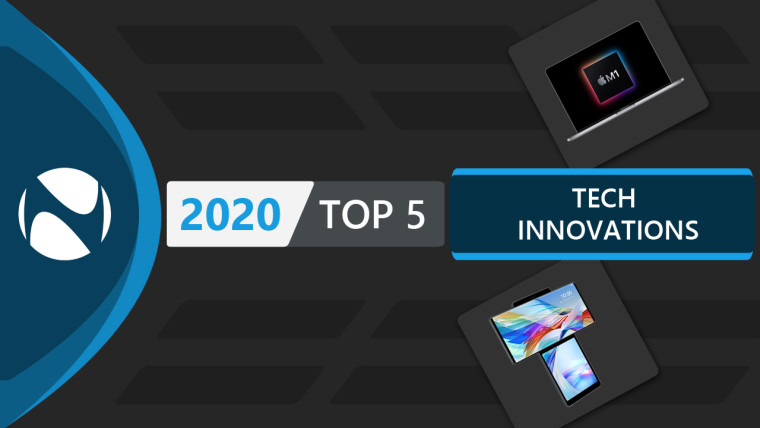 As we inch ever closer to the end of the year, it's always fun to look back at the cool things that happened in the past 12 months. Sure, this year may have had more than its fair share of negative moments, but in the technology world, things kept moving and we saw a lot of cool products make it to the market.

In this article, we're taking a look at the five coolest innovations in technology that we saw this year. Before we start, let us clarify that the coolest innovations aren't necessarily the best products, but rather the products that shake up the industry, change paradigms, or are just straight-up fun. It's also worth remembering that preferences are personal, so what we find the coolest may not necessarily be what you find the coolest. We'll have some honorable mentions to help us cover more ground, but if there's something we overlooked, make sure to let us know in the comments.

Foldable phones were propelled into the spotlight in 2019, but Lenovo was one of the few companies, if not the only, to be brave enough to show us a foldable PC. In 2020, we finally saw that idea materializing with the ThinkPad X1 Fold, and the concept is incredibly cool, with a solid execution to boot.

The ThinkPad X1 Fold has a 13.3-inch display, just like a lot of regular laptops you could find anywhere else, but that screen can fold, so you can use it as an ultraportable 9.6-inch laptop, with one half of the display being the actual screen, and the bottom half serving as a keyboard. In fact, Lenovo also sells a keyboard that snaps onto the lower half to create a true laptop experience, and the interface can adapt when you do that.

Lenovo thought of pretty much everything - the keyboard is Bluetooth so you can use it when the display is unfolded to use its 13.3-inch display; the display has a kickstand for when you have it unfolded, and when it's closed, the whole device has a cool leather case that makes it look like a classy notebook. It really shows the potential for foldable PCs, and it's an amazing starting point for the technology.

Where it falls flat is its pricing and the fact that, at the end of the day, it's running Windows 10, and the OS just can't keep up with the form factor. It's a first-generation product with first-generation problems, and while you probably shouldn't buy it, Lenovo has us excited about what could come next.

There are some honorable mentions for foldables, though, because the smartphone world also kept evolving this year. Samsung introduced the Galaxy Z Flip (and Z Flip 5G), plus the Galaxy Z Fold2, both featuring the new Ultra-Thin Glass (UTG) that can actually fold while being more rigid than simple plastic. The Z Fold2 also saw major design improvements with a big outer display and better durability. Of course, the price on these products is yet to come down, so there's still work to be done before folding phones become mainstream.

I suspect this will be a controversial pick, but the LG Wing is a really cool idea in my opinion. For years, all we've seen in smartphones are flat slabs, and even with foldables coming into the picture, we're just kind of missing some of the fun of yesteryear in the phone world. The LG Wing is really when it set in for me that companies are trying to do cool things again.

Sporting two displays on top of each other, the LG Wing features a funky design with a T shape, if you want to use both screens. At first, it looks like a regular smartphone, but give it a flick, and the top display goes horizontal, unveiling a smaller display underneath. These two screens can be used for multitasking, like texting on the bottom screen while watching a full-screen video on the horizontal display. LG also went out of its way to create a slightly different home screen for that horizontal display so it feels that much more intentional and natural. Aside from the screens alone, LG also baked in some cool features, like a legitimate gimbal camera that makes use of the T-shaped design to control the camera angle and frame shots on the fly.

I'm sure someone might argue in defense of the Surface Duo, which is also a dual-screen phone, but that phone feels, to me, like it's capitalizing a lot more on the existing foldable smartphone concept, and it does a lot less that's unique to it. We've also seen other dual-screen phones with some similarities, like the ZTE Axon M a few years back. The Surface Duo has definitely evolved the concept a good amount, but it doesn't stand out as being as cool as the LG Wing, and it also didn't pack the specs or polish to justify its exorbitant price tag (even more so than the LG Wing). Still, it's worthy of an honorable mention.

I'd also like to give a very quick shoutout to the ZTE Axon 20 5G for being the first phone with an under-display selfie camera. I almost gave it its own spot on this list, but the camera tech is really the only thing that's unique about this phone, and it's not as cool to see in action as the phones mentioned above.

Cloud gaming isn't really new this year, with services like PlayStation Now and GeForce Now being available for a while, plus Google's Stadia launching last year. But Microsoft came out with a service that's available at no extra cost if you have Xbox Game Pass Ultimate, giving you more ways to play an already huge library of games.

That means that, not only do you get a wide array of PC and Xbox games by subscribing to Game Pass Ultimate, you now get the ability to play the majority of those games on your phone, wherever you go, and at no extra cost. Xbox Game Pass was already an incredible value, including the vast majority of games from Microsoft's studios, plus a ton of games from other publishers like Destiny 2, Tetris Effect, Doom Eternal (though that's now owned by Microsoft), and more recently, the EA Play library on Xbox. Adding cloud streaming on top of that not only reinforces Xbox Game Pass's value as the best value in gaming, but also makes it the best cloud streaming service you can subscribe to.

The biggest drawback of Game Pass Ultimate cloud streaming is that it's still only available on Android right now, and competitors like Stadia or GeForce Now support a few more platforms. Still, Microsoft's service is definitely the coolest.

Of course, it's impossible to talk about this year without mentioning the next generation of consoles, starring Sony's PlayStation 5 and Microsoft's Xbox Series X|S. While each console has slightly different strengths and weaknesses, both brought very similar innovations, including being some of the first pieces of hardware to pack RDNA2-based GPUs and perhaps most notably, blazingly fast loading times courtesy of SSD storage and DirectStorage technology that even PCs weren't able to leverage before.

The thing is, most of that is predictable innovation, simply improving and implementing better ways to do the same things. The PlayStation 5 gets the edge for having the cool factor, and that's mostly thanks to its controller, called DualSense. While we'll have to see how these technologies are implemented in future games, new technologies like the improved rumble and the adjustable tension on the shoulder triggers bring new ways to immerse players in gaming experiences, and that's definitely a commendable effort. Sony also invested a lot in 3D audio with its Tempest Engine promising to support "hundreds of sound sources", meaning you can hear sounds as if they're coming from many different places. Sony even acknowledged that everyone's head is different, and it suggested that it may let users scan their own head to help generate custom 3D audio profiles in the future.

On top of that, Sony actually brought new experiences that sold the PlayStation 5, such as Spider-Man: Miles Morales (though this one works on PlayStation 4) and Demon's Souls, while Microsoft didn't have anything of its own to make its new consoles really shine after Halo Infinite was delayed.

On the other hand, Microsoft didn't have to do much to the Xbox Wireless Controller because it was already immensely comfortable (a long-standing flaw with Sony's DualShock series), and it makes up for the lack of new titles with unrivaled backward compatibility. Nearly every game and accessory that worked on Xbox One will work on the Xbox Series X|S consoles, meaning your entire backlog will work on the new consoles - and better than ever, at that.

Still, access to new experiences is a bit more exciting than keeping old ones for most people, and nothing here is radically different from what we've seen before. The PlayStation 5 definitely has more unique features that make it the pick for this spot.

For years, Apple was rumored to be making the switch from Intel processors to its in-house ARM-based processors, and in June, the Cupertino giant finally brought those rumors to life with the announcement of Apple Silicon. The company's first chipset, the Apple M1, was then announced with three new products to go with it - the new MacBook Air, MacBook Pro (13-inch), and Mac Mini, all promising huge performance gains over the previous models, and some of them with just passive cooling.

The company really didn't fail to deliver, and most benchmarks we saw after the products launched reaffirmed that Apple Silicon could truly supplant Intel in terms of performance, at least in these compact devices. Apple wasn't the first to bring ARM-based computers to market, but it might as well have been.

While Windows on ARM slogged in the first years of its life and - even after getting a purpose-built chipset in the form of the Snapdragon 8cx - failed to get much traction among users and developers, Apple Silicon has already prompted numerous major apps to add support for the new architecture. Adobe's Creative Cloud suite has started adding support for the new chips within weeks; meanwhile, it announced support for Windows on ARM PCs over a year ago and still hasn't fully delivered on it. On top of that, Apple's Rosetta 2 translation layer didn't have as many performance drawbacks as x86 emulation for Windows on ARM, so even without official support, most apps run fairly well on ARM-based Macs.

While the future is still uncertain for Apple Silicon Macs that require more power or upgradability, the Apple M1 was a stellar start and it let everyone know that the company can in fact move away from Intel. I'm certainly excited to see what other Apple Silicon Macs will look like, and if Qualcomm/Microsoft can bring forth something that competes toe-to-toe with Apple.

Those are the products we considered most innovative or groundbreaking this year, but there's a lot more that could have people excited in 2020. In the PC world, Nvidia, AMD, and Intel all brought exciting new products to the table that promise even more performance, and over on the phone side of things, Apple's iPhone 12 was the biggest design change the company has done in a few years. We highlighted our favorites, but let us know yours in the comments!