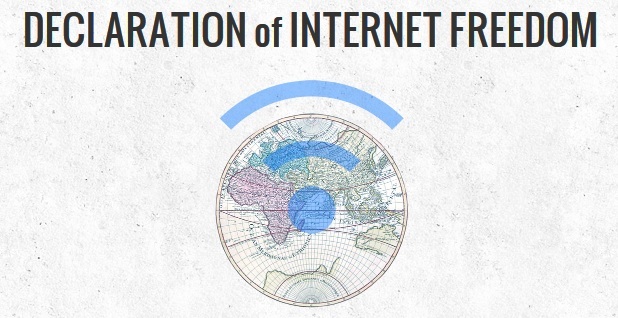 Ah, it's that time of year again; July 4th, when Americans celebrate the signing of the Declaration of Independence, the creation of the United States and the beginnings of a democratic reawakening that would, in time, take hold of the rest of the world. And yet, some two hundred and thirty-something years later, we're trying to get people to sign a document that expresses a lot of the same ideas, except this time they stretch across way more than one nation.

Today, the internet (and all of the things we take for granted, really) is facing more threats than ever before, and in the wake of attacks like SOPA, CISPA and ACTA, it seems like high time to lay down the law on its enemies. With that in mind, the authors of the Declaration (the tireless freedom fighters over at freepress.net) have laid down a few basic principles that we can hopefully all agree on:

And just in case you can't agree on that stuff, or if you don't think it's strong enough, they're inviting everyone to make their own contributions through debate, discussion, translation, and even rewriting. Actually, that's part of the idea - by essentially throwing the Declaration out there for everyone to make their own, they're highlighting the fact that the internet is the only place where you can do that, as freepress points out in their press release.

The Declaration's already gotten some influential support; besides countless signatures from folks like you and me (last we checked, it was at 17244), the ACLU, EFF, Mozilla, reddit, and Reporters Without Borders have also thrown in their support. And that's not even counting celebrities (including the internet kind) like Neil Gaiman, Cheezburger CEO Ben Huh, and BoingBoing's Cory Doctorow. And we're putting our money where our mouth is (well, not literally, but you know...) and signing the Declaration for ourselves.

Anyways, we're just gonna hope that you've already stopped reading by now and went to sign the Declaration for yourself. And just in case you haven't, we're going to plug it one more time: you can sign it right here. Oh, and by the way, if you happen to be involved in any sort of internet or political organization, why not try and see if you can get some of the higher-ups to throw their lot in, too?