Early adopters of Windows 8 will find the new operating system to be like Windows 7, but optimized and faster. In theory, any hardware device that worked on Windows 7, and even Windows Vista, should continue to work on Windows 8.

For any hardware device that does not properly install on Windows 8, conventional geek wisdom dictates to attempt running the installer with the Compatibility Mode tab set to "Windows 7." Unfortunately, not all drivers will install this way. Example: Intel's drivers for integrated HD Graphics.

Users of computers with second- and third-generation Core processors are, for now, the only users Intel are supporting with an actively developed driver for Windows 8. Those users can find beta drivers here.

Unfortunately that essentially excludes any user who purchased a computer (most likely a laptop) prior to 2011. In particular, the users of first-gen Core CPUs (graphics codenamed "Arrandale" and "Clarkdale") such as yours truly. Intel has made available drivers for users of computers with the first-gen HD Graphics and the GMA 4500 via Windows Update, but let's face it: graphics drivers supplied via Windows Update aren't the best. You'd definitely want to get an updated set straight from the manufacturer.

Will Intel provide drivers on their site for these "legacy" (ugh) folks after Windows 8 hits retail shelves? According to posts repeated by Intel representatives, nope:

It's understandable given the hardware involved that they will not support WDDM 1.2. That's fine. What isn't fine is relegating these chips to legacy status after just 2.5 years - much shorter than AMD or Nvidia. Case in point: Nvidia is now moving the Geforce 6-series to legacy support after an impressive 9 years of support.

But fortunately, there is a solution! Intel is updating drivers for Arrandale/Clarkdale users on Windows Vista and 7, and so with some manipulation users can get those to install on Windows 8. Here's how.

PLEASE NOTE: Do these steps at your own risk. In the event Intel does release non-legacy drivers in the future, please disregard this guide and download those drivers instead.

Step 1: Obtain the drivers in a ZIP archive. Example link is here.

Step 2: Extract the drivers to a folder and open up its contents. Navigate to the Graphics folder and open the .inf file located here. For 64-bit platforms the file is called igdlh64.inf.

Step 3: Search for the culprit in the .inf file. It should look like this:

Step 4: Even after doing so, the drivers will not install. In a change from Windows 7, Windows 8 will by default refuse to install unsigned drivers, or drivers whose .inf files were modified. Getting the drivers to install will require enabling Test Mode. To do so, open an elevated Command Prompt and run the following commands to disable Test Mode (tip from here):

Step 5: Reboot and install the drivers. When you're done, disable Test Mode by executing the following commands:

Step 6: Run a Windows Experience Index test and see the difference! Compare the score difference between the in-box Intel drivers, and those copied from Windows 7. In addition, you're able to access the Intel graphics control panel, in case you need to adjust colour/brightness settings. More importantly, you may run OpenGL applications, which the in-box Intel drivers do not support (thanks to the comments below for pointing this out). 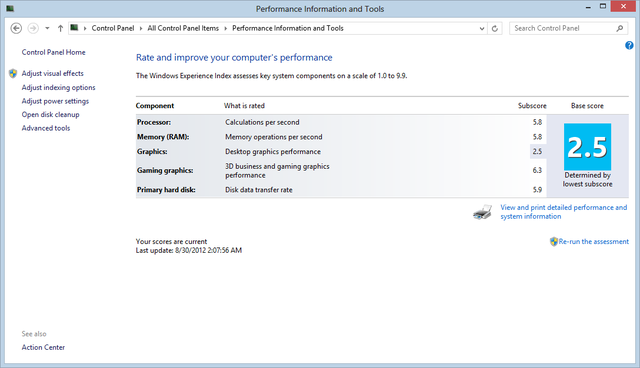 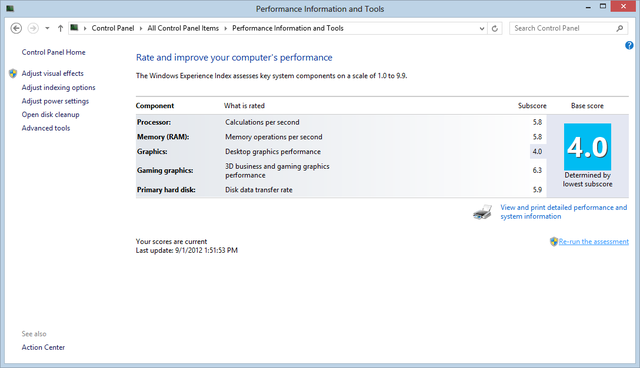