Earlier this year, Microsoft showed off its strategy to target the Google Chromebook market and one of the devices championed on stage at WPC 2014 was HP Stream. At that time, Microsoft had not announced the specs of the device but thanks to a leak, we can now see what this entry level device has under the keyboard.

While many had thought that the device would use Intel's ATOM chips, HP has opted for the AMD A4 Micro-6400T Quad-Core SoC with 1.0 GHz (up to 1.6 GHz) and integrated graphics unit Radeon R3 that only needs 4.5 watts of juice. This means that the laptop should be able to run without an active fan, according to the source of this information which is said to be an HP manual.

To no surprise, the RAM is not upgradable, so if you buy this machine, choose wisely and it looks like you can choose up to 2GB max. Storage options are quite small, to no surprise, with 32GB and 64GB on tap but there is support for SD cards which should allow you to easily expand the memory. You also get 100GB on OneDrive storage for 2 years with the device.

Finally, the device has a 14in display running at very disappointing 1366x768 resolution; you can check out the entire spec sheet at the bottom of this post.

It's not surprising that the specs are at the bottom end of the market and we will be curious to see how well Windows 8.1 performs on this setup. Considering that Chromebooks have faired well running on basic hardware, Microsoft needs to make sure that it's platform runs smooth to effectively compete with Google at the low end of the market. 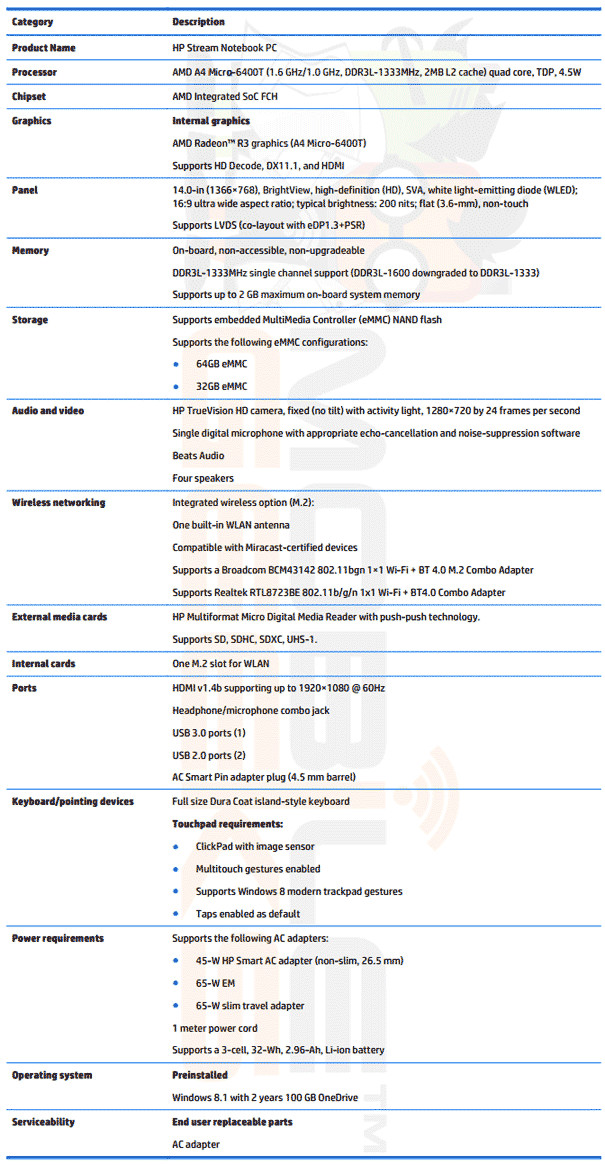