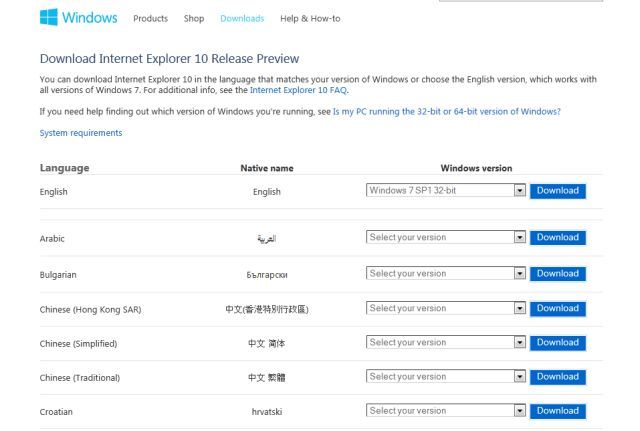 Earlier this month, Microsoft announced it would release the first version of Internet Explorer 10 for Windows 7 users sometime in November. This "Release Preview" of the latest browser from Microsoft will be made available after the launch of Windows 8 on October 26th, which includes IE10.

Now it appears that Microsoft is wasting no time in getting ready for the Windows 7 IE10 launch. The company has already posted up a download page for the browser, although at the moment none of the links work.

The page does show that in addition to the 32-bit and 64-bit versions of Windows 7 (with Service Pack 1 installed), Microsoft will also have a version of IE10 available for Windows Server 2008 R2 SP1 in its 64-bit incarnation. There are 36 different language versions that will be offered, plus four additional display languages.

The page also has a link which shows the system requirements for the browser. They are as follows:

CD-ROM drive (if installation is done from a CD-ROM)

Thanks to lordofangels for the tip!