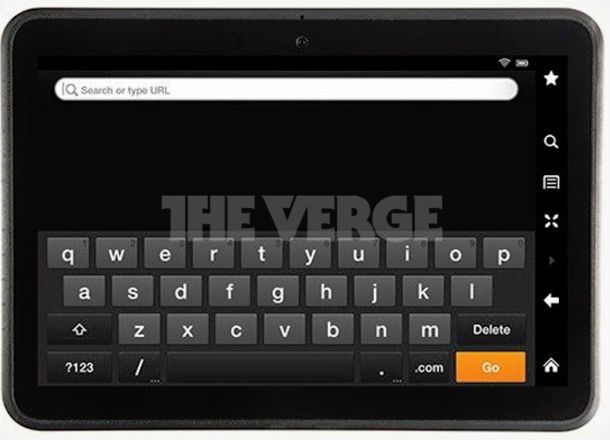 Earlier this morning, Amazon said it had no more Kindle Fire tablets to sell; it had "sold out" of the seven inch tablet that it launched less than a year ago, although it's likely you can still get one from a third party retail store. Now an image that may show what the successor to the Kindle Fire looks like has been posted to the Internet.

The Verge has posted the image from an anonymous source, which shows the virtual keyboard for the device's web browser. The article claims that it also received another photo of the tablet which it did not post. That unseen image reportedly shows that this device has a more streamlined user interface than the original Kindle Fire.

That's basically all we have at this point. The article doesn't say what the hardware specs are for this product, other than it looks like it is yet another seven inch tablet. Amazon is rumored to be launching both a seven inch and a 10 inch tablet, although they may not launch at the same time.

Amazon is still scheduled to hold a big press conference in Santa Monica, California on September 6th, where we will almost certainly learn more about the company's future tablet plans.