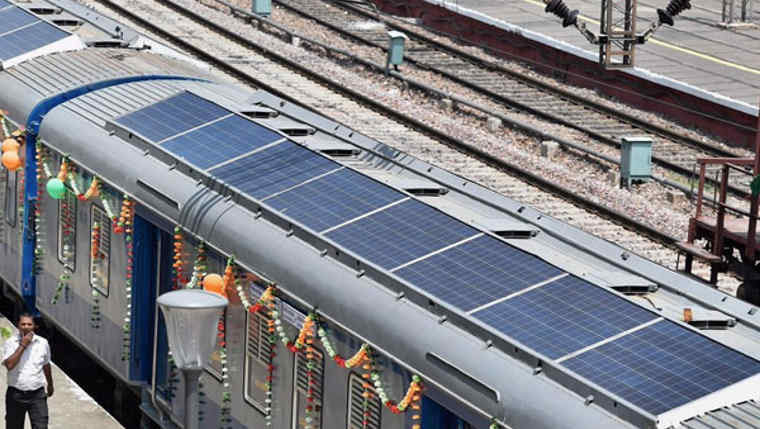 In addition to driverless cars, there are also quite a few developments in terms of mass transit systems. In South Korea they are working on their version of the Hyperloop; meanwhile, Indian Railways has recently revealed its new solar powered Diesel Electric Multiple Unit (DEMU).

The DEMU is a combined solar and diesel electric train; the solar panels have been carefully placed on the roofs of the carriages so that they may provide power for the internal electricity demands, such as lights and internal fixtures, of the train and carriages. The idea behind this is to try and reduce the amount of diesel being used for electricity. It says that the panels have been carefully fitted as there are a number of challenges that the panels face while riding on top of a train, such as surviving speeds of over 100km/hour as well as the risk of being stolen.

According to the company awarded the project of fitting these panels, Jakson Engineers Limited, The rooftop solar panels will generate 7,200 kilowatts of energy per year, this will offset around 9 tonnes of carbon, and according to its calculations this will save 21,000 litres of diesel per year for a DEMU train that had six trailer coaches.

In China, an automated electronic road train system, the ART, was also revealed this year, so it seems that energy saving, efficiency, and environmental impact are of growing importance on the Asian continent.

Although technically the DEMU is still a train that's locomotion is powered by diesel, it is a sensible and straightforward innovation of current tech that will contribute to some mitigation of Climate Change by reducing the carbon footprint of some of India’s trains.