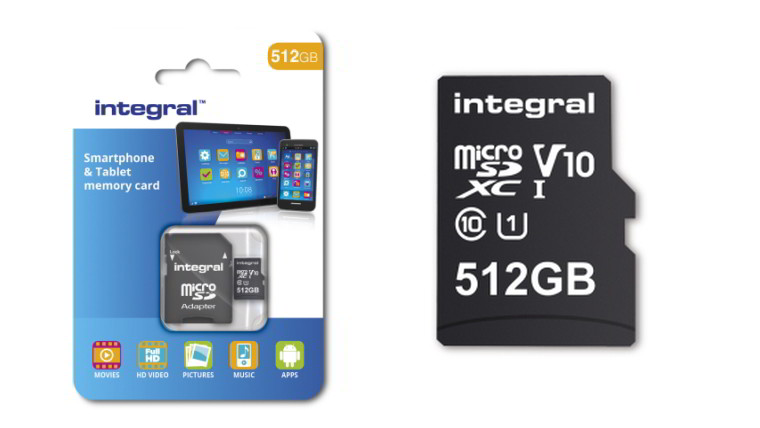 Late last summer, SanDisk wowed everyone with the first 400GB microSD card designed for smartphones and tablets. The next logical step was a 512GB card, and while Samsung has been said to be working on an integrated solution, UK company Integral Memory has taken the wraps off its own device, beating the competition to the next storage step.

Dubbed as the "512GB microSDXC V10, UHS-I U1," the card offers transfer speeds of 80MB/s, slightly slower than to 100MB/s of the SanDisk card, but does meet a V10 classification for video speed. In layman's terms, that means it can write to the card at the necessary 10MB/s to support full HD video.

While the card is targeted for Android phones and tablets at the moment, the growing need for high-storage capacity cards in such things as drones and various types of cameras - from security to dash - makes the 512GB card even more viable, despite a growing move toward cloud storage.

“Consumers have been clear in their call for increased storage, as mobile devices have become essential to many in everyday life,” James Danton, marketing manager for Integral Memory, said in a statement. “As a company, we are very proud to be the first to achieve the 512GB capacity milestone in microSDXC worldwide”.

The card will be available sometime next month, but they did not reveal a price. Given that the SanDisk 400GB microSD was released at $249 almost five months ago, the Integral card could come in very near the same price point.

California-based Microdia had announced a planned release of a 512GB microSD back in June of 2015, but nothing has been heard from the company about the card since.