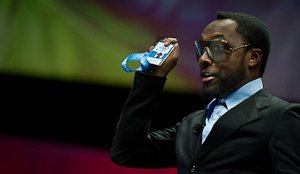 In a slightly unexpected move, Intel has made Will.i.am, one of the members of the band The Black Eyed Peas, their director of creative innovation. According to Intel's Facebook page, he's the company's "new boss."

It's not clear what Intel's new music star will be doing at the company, as they are not disclosing further information right now, but the company mentioned that Will.i.am is creating exclusive music for them to use. It's not like the technique is new, according to BusinessWeek HP previously hired Gwen Stefani to advertise their printer range and Snapfish service.

"Nearly everything I do involves processors and computers, and when I see an Intel chip I think of all the creative minds involved that help to amplify my own creativity,” Will.i.am said in a press release by Intel today. “Teaming up with the scientists, researchers and computer programmers at Intel to collaborate and co-develop new ways to communicate, create, inform and entertain is going to be amazing.”

Apparently Will.i.am will be with the company under a multi-year contract, and already has internal access to the company. Expect to be hearing a lot more from him soon.