As recently reported by Neowin, Intel has developed a new technology called "Light Peak". With its impressive duplex 10Gps connection it can transfer data at incredible rates. Today Intel has shown off Light Peak by playing a 1080P video over the connection while also transferring files using OS X.

While incredibly impressive, what was even more interesting was that Intel appeared to be running OS X on a hackintosh computer. The video, which can be seen in full here, clearly shows OS X on the monitor but no distinguishable Mac can be seen. There are a couple of possibilities, it could be a torn apart Mac Pro, Intel may have access to certain Mac hardware for development, or it is in fact a hackintosh.

The one idea that they may have access to development hardware seems plausible but considering how locked down Apple is with their security, it seems unlikely they would let them display an upcoming product in this way. Also, the new connector is a prototype, why would Intel hack up a development unit to test out its new connection?

Whatever the answer may be, it does show that the OS X environment may be preferred by Intel as that was the operating system they chose to show off their new connector. Even more interesting is why they didn't show it off on their own flavor of Linux which they recently unveiled. 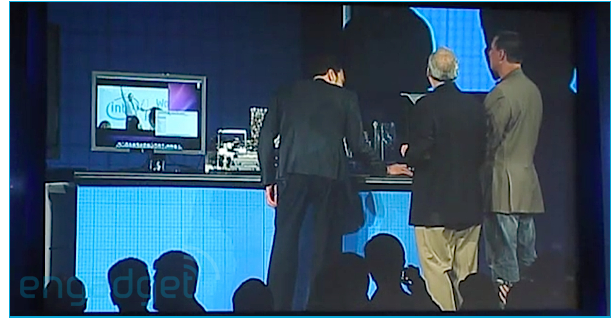