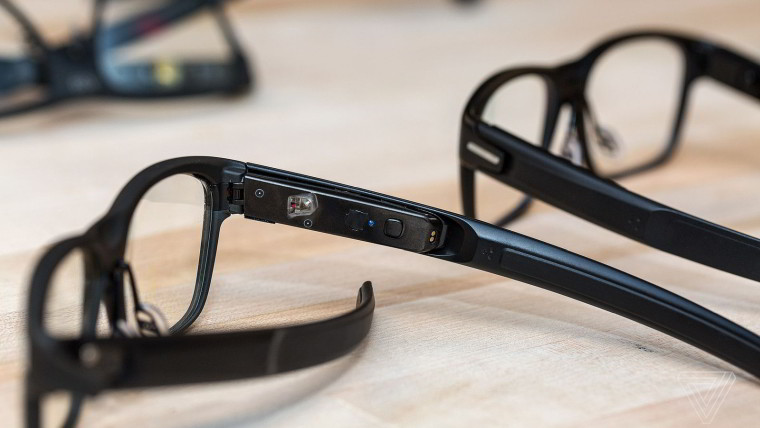 We've known that Intel was working on a new set of smartglasses, but the company has kept the details rather quiet up until now. However, a behind-the-scenes look at the new device offers an early sense of just what Intel hopes to accomplish with its new design.

The Verge got an early look at the prototypes in development, and while Google Glass may be stuck in your mind about what smartglasses look like, Intel's project is more subtle. Called Vaunt, the glasses look like your average eyewear, although slightly heavier at around 50 grams. The monochrome holographic projector bounces a 400x150 image off a mirror onto one of your eyes, offering simple messages or alerts that - at least right now - can be read and dismissed with the tilt of the head.

The beam reflected onto the eye is "at the very bottom end of a class one laser," so individuals don't have to worry about eye damage. The best part seems to be that the image is unobtrusive and will disappear if the user is not looking right at it. And since the image is beamed to the back of your retina, it won't matter whether you have prescription lenses or not to see the image.

Things displayed can vary from directions to birthdays, or even recipes if you are in the kitchen. There is also mention of possible integration with Alexa or other smart assistants. Later this year, Intel hopes to open up the platform for developers through an early access program and SDK. The device is expected to work with either Android or iOS apps. Battery life is expected to last 18 hours, and would work indoors or in sunlight.

Intel still isn't talking about whether it plans to sell off its New Devices Group as reported earlier this week. The project could end up being more of a concept for OEMs to run with.

However, the product does have potential, although there is the drawback of not knowing if someone is actually paying attention to you when you are talking or scrolling through messages on their glasses. As one exec told The Verge, "you can ignore people more efficiently that way." But the eyewear does offer a bit more of a normal look to the technology than Google Glass did, and could offer the next step in functional wearable technology beyond the smartwatch.