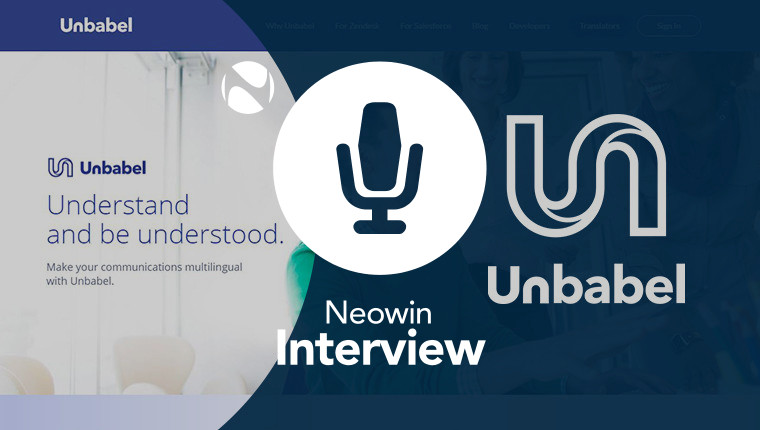 Translation has helped folks from all around the world to gain access to information that might otherwise remain unavailable due to the language barrier. Services like Microsoft's Skype Translator or Netflix's Hermes seek to alleviate this consumer pain point by using machine translation, or a curated team of human translators, respectively. While each of the two has its own merits, there are also shortcomings on either side: AI-powered translation can sometimes sound off, while human-only translation doesn't scale particularly well to the needs of an ever-increasing customer base. This is where Lisbon-based Unbabel comes in.

Started in August of 2013, the company was founded by Vasco Pedro, Hugo Silva, Bruno Silva, João Graça, and Sofia Pessanha, and seeks to combine the capacity of AI-powered translation with the advantages of having a human team of translators.

In 2014, the firm received the backing of seed accelerator Y Combinator, managing to raise $1.5 million in seed funding due to "fast growth in sales and number of editors". Late 2016 brought another wave of investments, this time from Norton Capital and Caixa Capital, which contributed another $5 million. Unbabel amassed a total of over $8 million in company funding, and at the time of writing, its Lisbon office houses over 60 people, helped by another 50,000 worldwide.

Here's a helpful diagram of the translation process:

If your particular needs dictate it, Unbabel also integrates with the Salesforce Service Cloud, with Zendesk, and even has its own translation API which can be used by developers.

We had a chat with Vasco Pedro, the company's CEO, to ask about his previous experiences as an entrepreneur, what the role of Unbabel is in the overall translation market, and what the future holds for the company.

Thank you for taking the time to answer some of our questions, Mr. Vasco Pedro. First and foremost, when and how did you decide to become an entrepreneur?

The first time I remember clearly wanting to start a company was during my internship at Google. I felt at the time, that despite being an incredible place to work, the probability of having an impact in such a big company was very small. I knew I’d need to start something to have that potential for impact, with a higher degree of risk/reward.

Your first foray into the world of entrepreneurship was Mind Keane. You then got a position at Google, after which you created another start-up called Bueda, and then finally Dezine. Referencing your previous attempts, you stated that they are a “checklist of classic mistakes entrepreneurs do.” Could you expand on that?

Sure, there are three typical mistakes made by a first time entrepreneur. First, starting a company as a solo founder. This is much harder, when you inevitably go through the tough parts there is no one there to carry part of the burden. Second, starting a company with a technology in search of a problem. It’s really hard to find product market fit and you end up iterating forever. Third, joining a company as a co-founder when the company doesn't have a clear CEO. Infighting and lack of direction make it very unlikely that the company will succeed.

Getting on to the question that has probably been on the tip of our readers’ tongues since the beginning: what is your newest start-up, Unbabel, all about?

Unbabel’s goal is to enable anyone to understand and be understood in any language. Despite globalization, language is still a huge barrier to success for companies. We’re building the world’s translation layer to help businesses communicate with their international customers in a seamless manner. We do that with a combination of artificial intelligence (self-learning, self-improving machine translation) and a crowd of tens of thousands of people around the world who post-edit the outputs to “sound” human, and to help train the AI side to improve over time.

In terms of its inception as a human-refined translation initiative, that also harnesses the power of machine learning, do you think Bueda planted the seed of what was eventually to become Unbabel?

Actually, not at all. Bueda was about using semantic analysis to understand videos and images better.

Did your experience with Y Combinator motivate you to start Unbabel, or was it an inevitable result of your previous experiences?

We started Unbabel before applying to Y Combinator, but going through YC changed us profoundly. The ability YC has to help companies focus and grow is unparalleled.

Could you tell us about the process of becoming a translator for the company?

It’s relatively simple. You go on the website, apply, and then go through the onboarding process where your translation skills will be evaluated. Then, once you become a paid translator, you can start earning money.

Can you provide a brief outline of what a translator’s day could consist of? Is he or she hired to work on-site, do you have a strict work schedule, that sort of thing?

People work when they want to, from their desktop or mobile. It’s made to be very casual, but we do have super users who do nothing else.

You have a respectable number of languages supported by your service, namely 28. Do you have any plans to expand this offering in the near future?

We’ve grown with our customers’ needs over time, and we’ll continue to add languages in the future.

Some of your clients include Oculus, Pinterest, Trello, and MyFitnessPal. You state on your website that you have the “fastest average speed in the industry”, in terms of delivering translated content, at 20 minutes. How do you manage to keep it so consistent?

We maintain our consistency with our amazing technology that simplifies the work and an awesome community that works anywhere, and everywhere.

Initiatives like Netflix’s Hermes or Microsoft’s Skype Translator are targeting a similar consumer pain point to Unbabel. What do you think is your company’s unique offering in this space?

Unbabel has a unique differentiator in that we push technology to its state of the art limits, and then use a curated crowd of people to bring the quality up to a level that’s indistinguishable from a purely human process, which would be unscalable.

A particularly interesting feature you’ve introduced a couple of years ago was Smartcheck. Could you tell our readers more about that?

Smartcheck’s goal is to help the human translator become super powered. That is, to use AI to enable a human to produce text faster and error free. It is deployed in both our web and mobile interfaces and we are continuously improving it. Expect major news soon.

Finally, technology moves at quite a fast pace. What does the future hold for your company as far as potential areas of expansion?

Neural Machine Translation is advancing incredibly fast, offering a much higher degree of “fluency,” but it’s still riddled with very unpredictable errors that are difficult to spot and filter out automatically. We’re now working on our own, of course, and we think that our human post-editors will be a crucial part of rolling it out far more effectively than others.

We would like to thank Mr. Vasco Pedro for taking the time to answer our questions, and wish him well in his company’s future endeavors.