Apple announced today during their keynote the all new Apple TV. Although it was released back in September 2006, the new Apple TV will have many improvements over it's previous version.

The new, smaller, Apple TV is less than 1/4 the original size of Apple TV comes loaded with a ton of features and accessories, including WiFi, HDMI, Optical audio, and an Ethernet port. Users can stream (720p) HD video, no syncing, with a photo slideshow. The new Apple TV comes with a remote that looks similar to a taller iPod Shuffle, so you can browse through movies, TV shows, podcasts, music and quickly and easily navigate through the menus.

Consumers can rent commercial-free HD TV shows for $0.99 from Apple, with a ABC and FOX TV shows, with more Hollywood studios to follow soon. Users can stream from Netflix, YouTube, Flicker and MobileME. Consumers can also stream HD movies for $4.99.

Apple is introducing a brand new UI, unlike anything they have released before. The interface includes ratings, reviews from a variety of different sources and information about the movie or TV show including actors and directors. Users will also be able to stream media from an iOS device, such as the iPad, and stream right onto the Apple TV, allowing you to stream to any Apple TV device in the home. This feature will be available in November, when iOS 4.2 comes out. 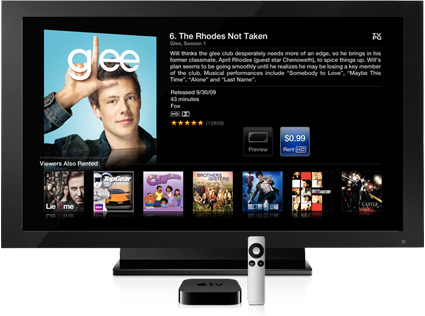