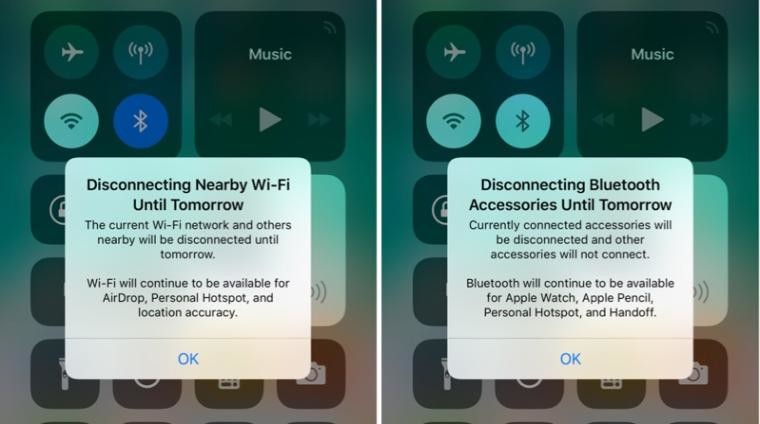 Bluetooth and Wi-Fi on your iPhone really shouldn't be confusing. But Apple succeeded in making them so in the release of iOS 11. Control Center toggles were not explained, and users were left a bit frustrated on what was happening when they tried to use them. Luckily, the release of iOS 11.2 beta 3 has now added popups to explain.

The new popups detail that toggling Wi-Fi and Bluetooth using the Control Center are not permanent, but temporary. The communications with devices are disabled until "tomorrow" at 5 a.m. local time, at which time they will revert back to being active. iOS 11 had turned them from on-off switches to the toggles, which were never explained unless you happened across a support document on the official site.

Of course, despite the pop-ups, there are other situations where Bluetooth and Wi-Fi could be re-enabled, namely:

For Wi-Fi, it can also be reactivated if you walk or drive to a different location. If you do want to permanently disable either Wi-Fi or Bluetooth, both can be done it their respective sections in the Settings app.

Beta 3 of iOS 11.2 was released today to developers and public testers.