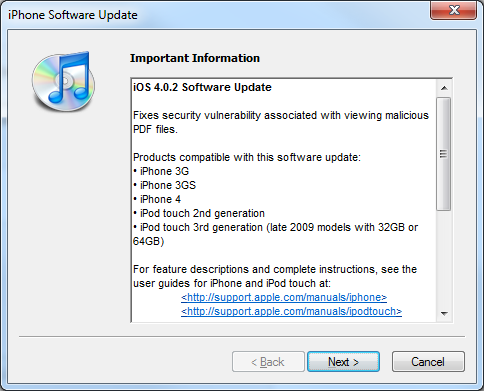 Apple released another update for the iPod touch, iPhone 3G, 3GS and 4 today, patching two security holes in the operating system. iOS 3.2.2 for the iPad has also been released.

The current jailbreak method, which can be used on any iDevice, uses the Safari browser and a single swipe of your finger to execute the unauthorized code, allowing users to run Cydia, a home-brew App Store developed by Jay Freeman.

Jailbreak users should use caution, as this update will unjailbreak your device.

The massive 579MB update is available through iTunes for the iPhone and iPod touch, just connect your device and click update.