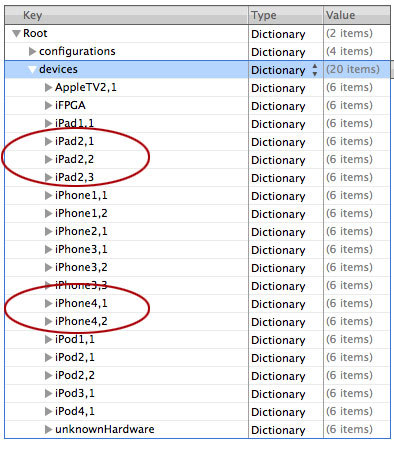 No real surprises here, but code in the newly-released iOS 4.3 beta suggest next-generation iPads and iPhones are under development.

Engadget did some digging into the latest beta of Apple's mobile OS, released yesterday, and found code keys referencing an 'iPhone4,1', 'iPhone4,2', 'iPad2,1', 'iPad2,2' and 'iPad2,3'. By way of reference, the iPhone 4 is identified as 'iPhone3,1', while the Verizon CDMA iPhone 4 is labeled 'iPhone3,2', indicating minor hardware changes. Similar keys have, in the past, been used to indicate the development of new Apple products.

The new iPhone keys almost certainly refer to the ''iPhone 5'', which if Apple follows custom will be announced at this year's Worldwide Developers Conference and released soon after. On the other hand, the new iPad identifiers indicate something more interesting. While 'iPad2,1' and 'iPad2,2' most likely refer to a second-generation iPad with similar hardware configurations to the current generation tablet (WiFi-only and WiFi+3G), 'iPad2,3' indicates a third ''iPad 2'' hardware configuration.

Francis Shammo, chief financial officer of Verizon Communications, may have offered a clue earlier this week when he stated Verizon will offer a CDMA iPad at some point. It's worth noting that Mr Shammo did not say which generation iPad Verizon would offer, and with no reference to an 'iPad1,2' in the iOS code, it would not be too much of a stretch to suggest 'iPad2,3' could be a second-generation, CDMA-compatible iPad. Speculation is rife that Apple will announce the next-generation iPad sometime this month, with January 27 marking one year since the announcement of the first iPad.

Interestingly, a reference to an 'iPhone3,3' is also present, which would suggest a third hardware revision of the iPhone 4. The same code key has, however, been present since beta versions of iOS 4.0, so it may merely be a superfluous key.

Meantime, Boy Genuis Report is citing an Apple source who claims the new iPad multitouch gestures added in the iOS 4.3 beta are there for a reason - Apple is reportedly planning to remove the home button entirely from a future generation iPad. Whether or not the ''iPad 2'' will be the first with the new design is not known, but BGR's source added that the change will also make its way to the iPhone at some point. Home button-free devices are reportedly already in the hands of Apple employees for testing.