When the iPad was first announced back in January, consumers looked at the device as a possible failure.  With a lack of features at launch, like a built-in webcam and flash, many expected the device to be the next Microsoft Origami.

Not many expected the iPad to take off as it did, where shoppers are finding it hard to even find it in stores, and retailers are selling the device almost as fast as it comes in.  According to All Things Digital, last weeks reported sales of the iPad mean it outsold Mac's.  The iPad sells approximately 200,000 units a week, while Mac sales were estimated around 110,000 units per week, in the US.

The iPad sales might be strong, and outselling Mac's almost 2:1, but it still doesn't outsell the year old iPhone 3Gs.  The iPhone 3Gs is said to be selling an estimated 246,000 units a week, about 25% more than the iPad; the iPad sold 300,000 units in the first day of sales.

With Mac sales at an all time high, up 33% in the 2Q of 2010, Apple is showing strong sales all around with its iProducts, including the iPod touch.

The iPad is scheduled to go on sale next week in Australia, Canada, France, Germany, Italy, Japan, Spain, Switzerland and the UK.  Other international countries are expected to get the iPad on July 10 of this year. 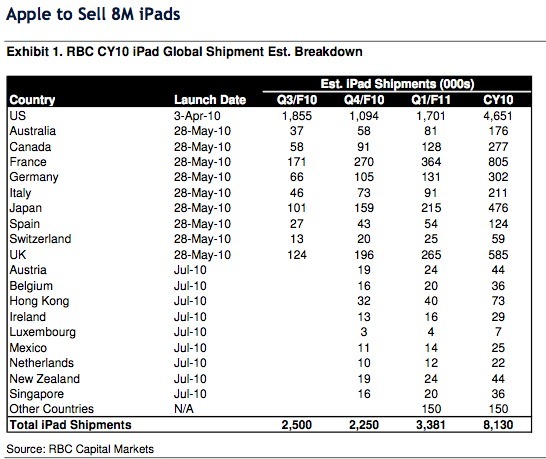