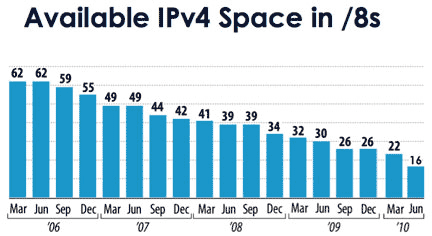 On Monday, the Number Resource Organization announced that adopting IPv6 addresses was now more important than ever.

The news came as it was announced that IPv4 addresses are down to the last 5% of availability. The NRO, who controls the fair distribution of unallocated Internet resources (IPv6 and IPv4 addresses and Autonomous System (AS) numbers) also announced that in nine months, 200 million IPv4 addresses have been allocated from IANA to the Regional Internet Registries, meaning that it could be around the same period of time before they’re all gone.

The reality is that IPv4 is able to supply 4.3 billion Internet addresses compared to the approximate 3.4×1038 that IPv6 is thought to support.

Bigger companies such as Google and Facebook are already working to adopt IPv6 addressing schemes but smaller companies (most likely the ones still using IE6) are struggling to change their ways.

"This is a major milestone in the life of the Internet, and means that allocation of the last blocks of IPv4 to the RIRs is imminent," states Axel Pawlik, Chairman of the Number Resource Organization (NRO), the official representative of the five RIRs. "It is critical that all Internet stakeholders take definitive action now to ensure the timely adoption of IPv6."

The NRO also stated that IPv6 is the "next generation" of the Internet Protocol. According to their announcement, there was a 70% increase of IPv6 allocation and an 8% increase on IPv4 in 2009. Thankfully for us all, it seems people are starting to realize the importance of IPv6 over IPv4.