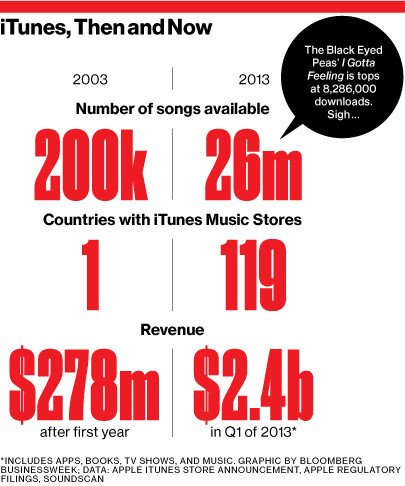 Since its inception 10 years ago, iTunes has reigned as king of the music world – it redefined how consumers bought music and allowed unknown musicians to reach fame.

When Steve Jobs and company opened the iTunes store on April 28, 2003, it marked a new era as a legitimate, industry-supported way to get music online without pirating. Steve Jobs said that  “Consumers don’t want to be treated like criminals, and artists don’t want their valuable work stolen.” This philosophy is where iTunes began.

Fast forward 10 years, though, and things are starting to slip for iTunes as the once bargain price of 99 cents a song is now deemed too expensive compared to paying $10 a month to have any song you want on just about any device you have by some. iTunes hit its peak in 2010, when it held 69% of the US marketshare in digital music sales, but it has been falling ever since. Apple's service currently holds 63% of the U.S. digital music market – still quite a high number, but streaming services like Spotify and Rdio are growing in market share every day and stealing that from more traditional digital market places like iTunes and Amazon.

As well as streaming services, many users don't feel like iTunes has evolved enough and that it looks outdated and boring. "There is nothing on iTunes' store today that gives anyone the impetus to buy something," Ted Cohen, the former digital chief for major record label EMI said in an interview with Business Week.

All of this is not saying that iTunes hasn't grown, because it has significantly – just not to the amount that its streaming counterparts currently are growing.

Apple's most recent update to iTunes included iCloud and iTunes Match, which only just put them on par with their rivals like Amazon and Google. There have been heavy rumours of Apple adding streaming to iTunes, however, which Apple will be hoping that it will stop this slip and keep it at number one.