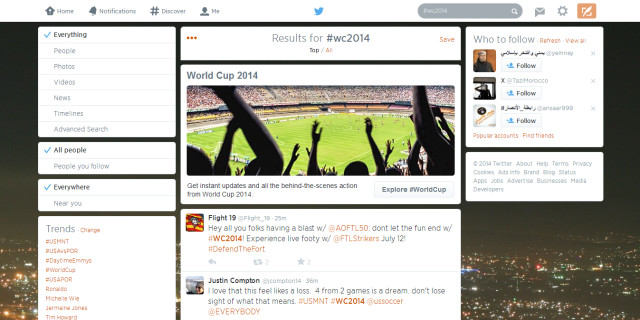 Militant Islamists from ISIS, who just weeks ago overthrew several major cities in Iraq, have taken to Twitter in full force: members of the group are seemingly hijacking hashtags for the 2014 World Cup in order to spread their message.

As reported by The Independent, ISIS members have been utilizing World Cup hashtags like #ENG and #Brazil2014 to target Westerners with specific propaganda. Many of the hijacked hashtags contain a video, starring a 20-year-old medical student from Cardiff who travelled to Syria to fight for ISIS, attempting to recruit other Westerners to the cause of Jihad.

The ISIS recruitment video being disseminated via World Cup hashtags

Unlike other militant organizations, ISIS has wholeheartedly embraced social media and propaganda in general; handing out ice cream and donuts to children in the cities they conquer, distributing a periodical English-language news magazine, and running Twitter accounts in multiple languages dedicated to news and information from a Jihadist perspective. ISIS' campaign to win over the hearts and minds of locals and Westerners alike has seen an obvious culmination with their use of social media, and while Twitter continually shuts down the accounts of ISIS members on their service, dozens more pop up in their place. ISIS' presence on social media is so strong that just last week the Iraqi government blocked access to all major social networking sites, like Twitter and Facebook, in an attempt to halt the militants.

At current, multiple ISIS accounts are incorporating the World Cup hashtags into their tweets. It is unknown if Twitter is taking any preventive measures to stop the hashtag hijacking, but any attempts by ISIS to spread their message will likely be drowned out by legitimate fans of the sport.