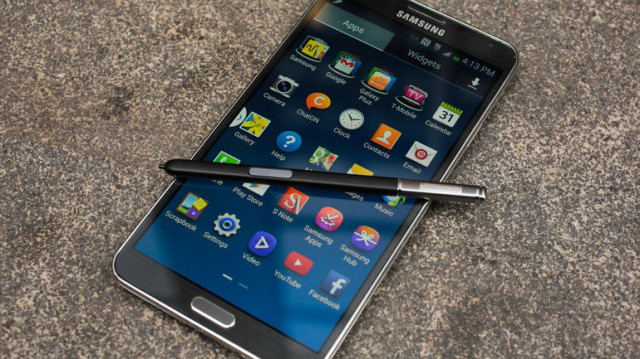 The specifications of the highly anticipated Samsung Galaxy Note 4 have been leaked on the website of the popular Android benchmarking app AnTuTu, and at first glance they appear to be extremely encouraging. Joining the likes of the LG G3 and Oppo Find 7, and much to the dismay of Huawei's CEO, the Galaxy Note 4 will have a stunning Quad-HD (1440p) display. Complementing the display is the front facing camera, which is exactly 3.68 megapixels. Why the specific number? If we translate 3.68 megapixels to a 16:9 aspect ratio, we learn that the photos are exactly 1440p. So by matching the camera to the display, we end up with a pixel density that is in perfect alignment with the resolution of the display.

Some of the other specs include a hearty 3GB of RAM and a 16 megapixel rear camera. However, before we move onto the chipset, it's worth mentioning that Samsung releases at least multiple variations of their Galaxy Note range, such as the rumor that some markets will receive a variation with a curved screen. The chipset also changes from market to market: 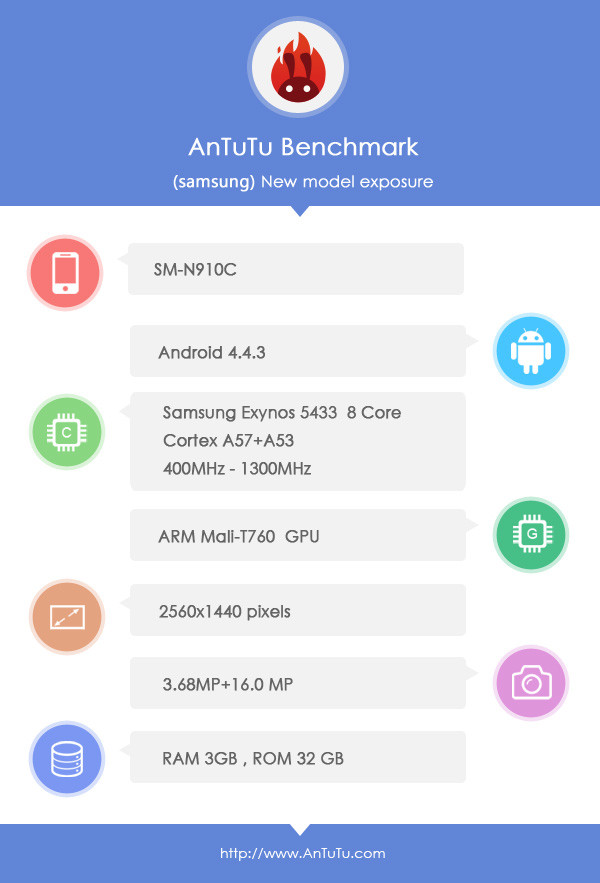 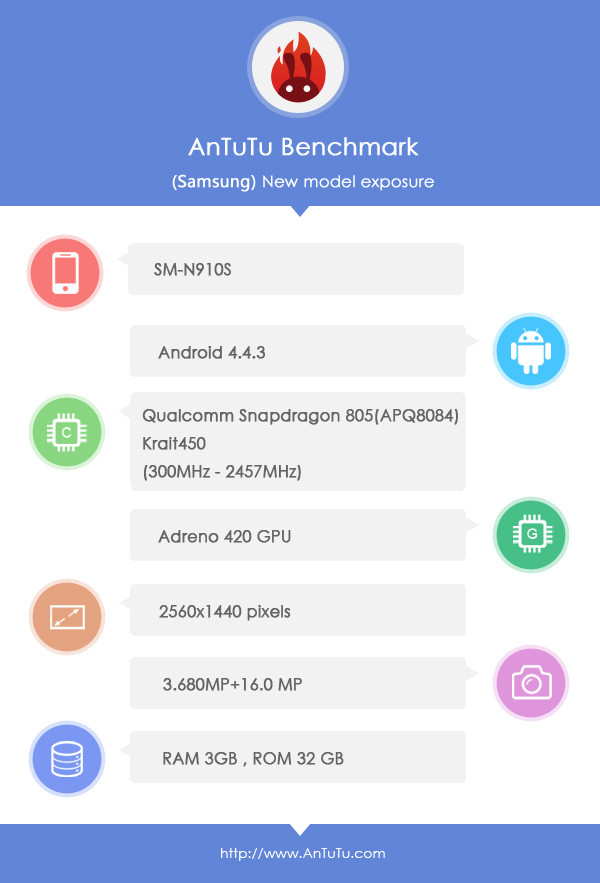 The Qualcomm variation of the Galaxy Note 4 will be packing the quad-core juggernaut Snapdragon 805, clocked at 2.5Ghz per core and allowing for 25.6GB memory bandwidth. It will also have the latest Adreno 420 GPU which reportedly delivers 40% higher performance than that of the Adreno 330.

The Exynos variation of the Galaxy Note 4 will have the eight-core Samsung Exynos 5433, but it appears to only be clocked at 1.3ghz per core. This information is probably incomplete however, as it is extremely unlikely that the processor will have such a low clock-rate. The Exynos utilizes big.LITTLE technology, meaning that it has two separate blocks of processor cores and either block would be turned on or off depending on the performance needs of the user. It will, however, have a Mali-T760 GPU, which is definitely something worth writing home about. Unfortunately, there are no benchmarks of either the Qualcomm or the Exynos variation as of yet.

The Samsung Galaxy Note 4 is expected to be announced very soon, and it will definitely be another great contender for the high-end smartphone market.