The smartphone market has matured with most of the developed countries saturated. This has led to an avid push by both Google and Apple to push their respective Operating Systems in developing countries such as India and China. While Apple is allegedly planning to start manufacturing in India, Chinese OEMs are already ruling the market for Android in the subcontinent. Apple has also made inroads in the Chinese market propelled by steady sales of the iPhone 7 and 7 Plus.

In the latest reports, Kantar claims that Android and iOS had strong quarters in urban China for the three months ending April 2017 but, other regions saw them biting into each others' share. Windows phones continue their slow spiral into the abyss as most of its remaining users flock to other platforms. 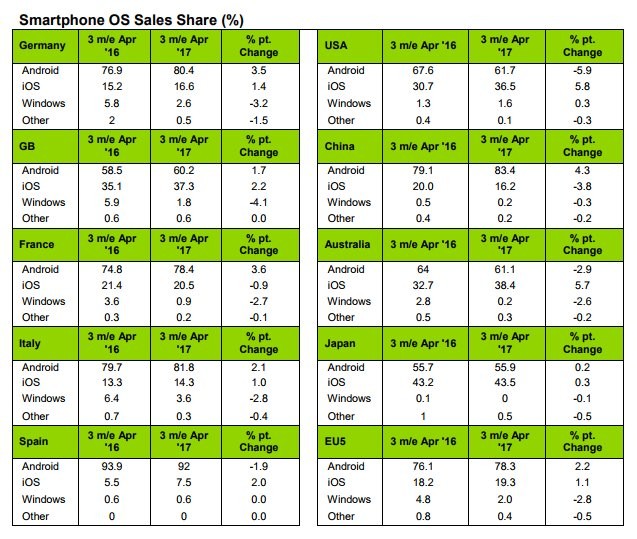 Apple had a better outing in the US as Android fell almost six points in the region. Interestingly, even Windows phones grew in the country as compared to its standing the same time last year. Google's fall in America was caused by slumps in its OEMs' numbers. Samsung, LG, and Moto experienced year-on-year declines which couldn't be offset by the release of such flagships as S8, S8+, and G6. iOS did much better as it "accounted for 36.5% of smartphone sales in the US" for the three months ending April 2017.

Both platforms rose in EU5 owing to Windows switch-overs with Android taking a 2.2% growth to take 78.3% of the smartphone sales in the three months ending April 2017 against iOS' 1.1%, bringing Apple 19.3% of sales in the region. Huawei turned out to be a dark horse for Europe's five biggest markets becoming the "third largest brand across Germany, France, Italy and Spain" thereby contributing to Android's growth. The Chinese company also improved its standing in Great Britain by capturing 8.9% of smartphone sales, a 6.1% increase as compared to last year. It is clear that the smartphone battle will now be fought on a different turf, and that is the developing countries.