Back at CES, Lenovo announced its new brand of gaming laptops: Legion, starting with the Y520 and Y720. The latter is the more powerful of the two, coming with an Intel Core i7-7700HQ processor, 16GB RAM, and an Nvidia GeForce GTX 1060 with 6GB GDDR5.

There's no built-in Windows Hello support or a touchscreen, but it contains more gaming-centric features, like an integrated Xbox Wireless Adapter.

The Lenovo Legion Y720 is a cool-looking machine, as gaming laptops tend to be. You probably won't be bringing this to the office and setting it up on your desk; well, unless you're a professional gamer or something, or a tech reviewer.

It comes in any color that you want, as long as it's black. The rest of the device is accented in red, with a border around the trackpad and red JBL speakers above the keyboard. Also, the RGB keyboard is 'R' when you first boot it up, although that's configurable to be pretty much any color you want. 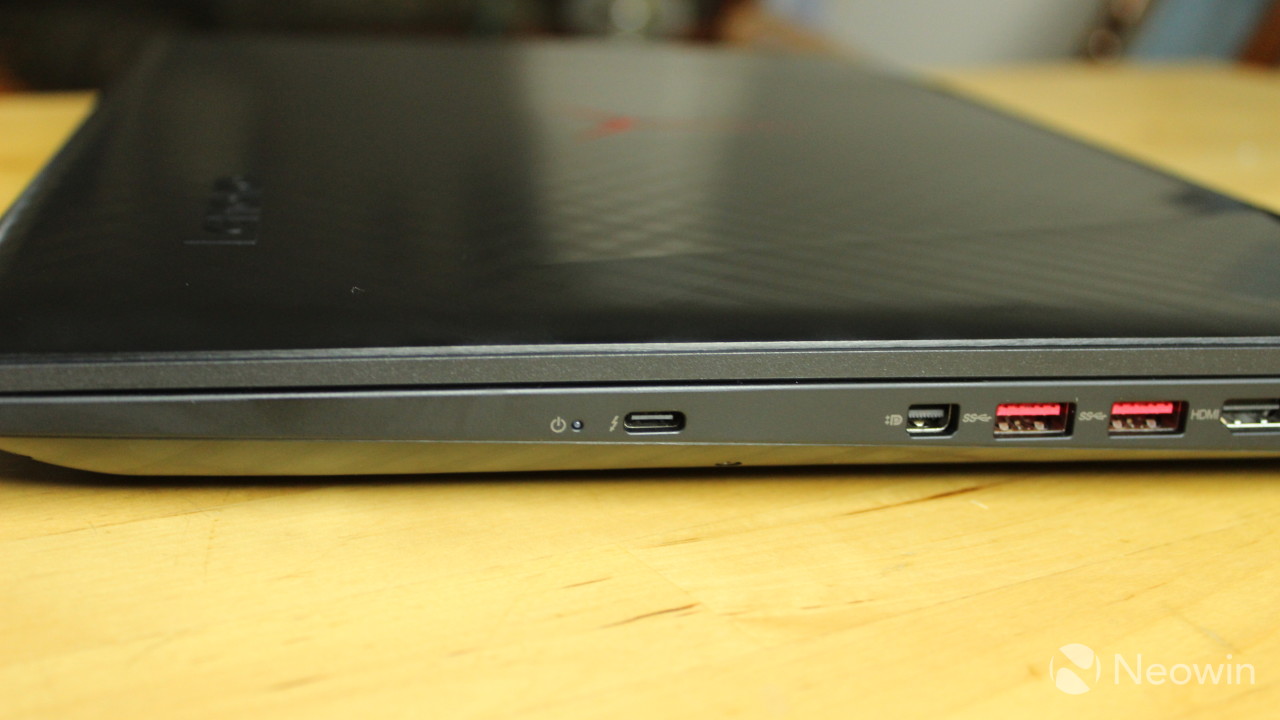 As noted in the specs, there's no shortage of ports on the Y720, which is super-helpful in day-to-day use. On the right side, you'll find Thunderbolt 3, HDMI, two USB Type-A, and one Mini DisplayPort. On the left is an additional USB Type-A port, 3.5mm headset jack (both input and output), Ethernet, and power.

The device is charged using Lenovo's proprietary charging cable, which is frankly a little disappointing. I'd like to see as many devices as possible use a standard like USB Type-C, especially given that the Y720 doesn't have the best battery life (battery life can be forgiven, but we'll come back to that). 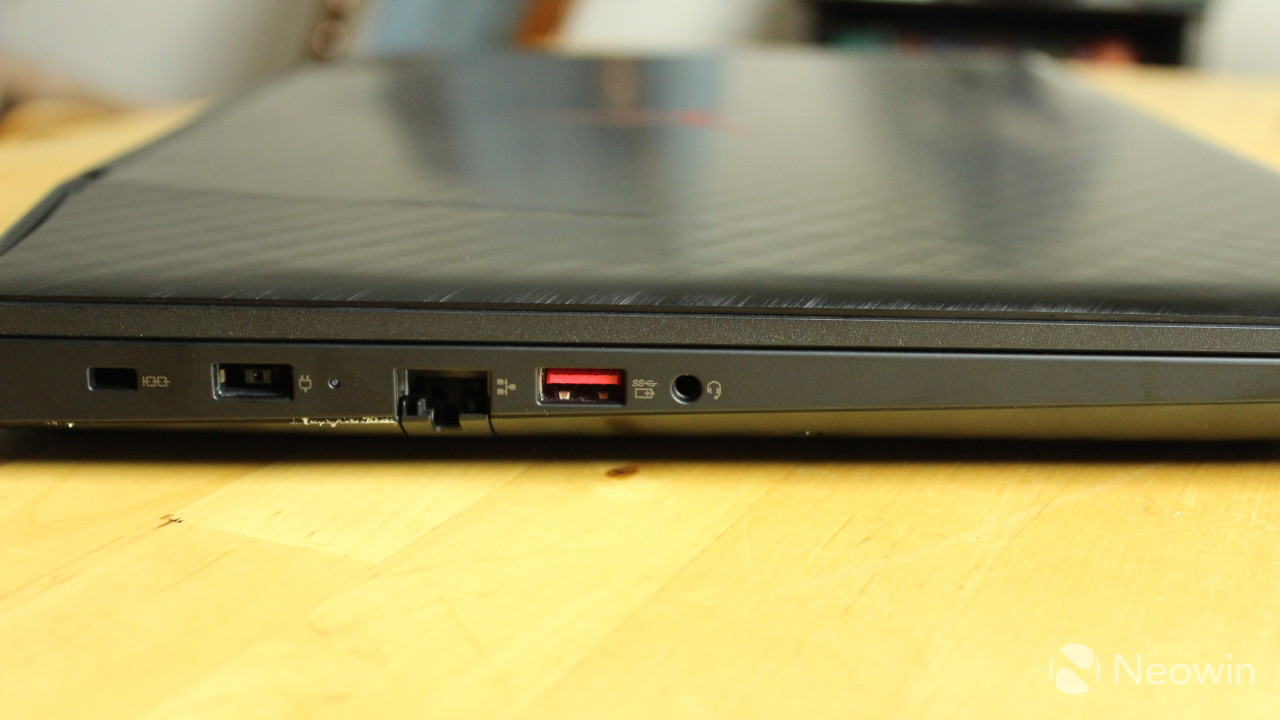 The Lenovo Legion Y720 is available with an anti-glare 1080p or a glossy 4K LCD. I don't say this much, but I think that 1080p is the way to go here. For one thing, battery life on such a powerful machine isn't great, and 4K would make it even worse. 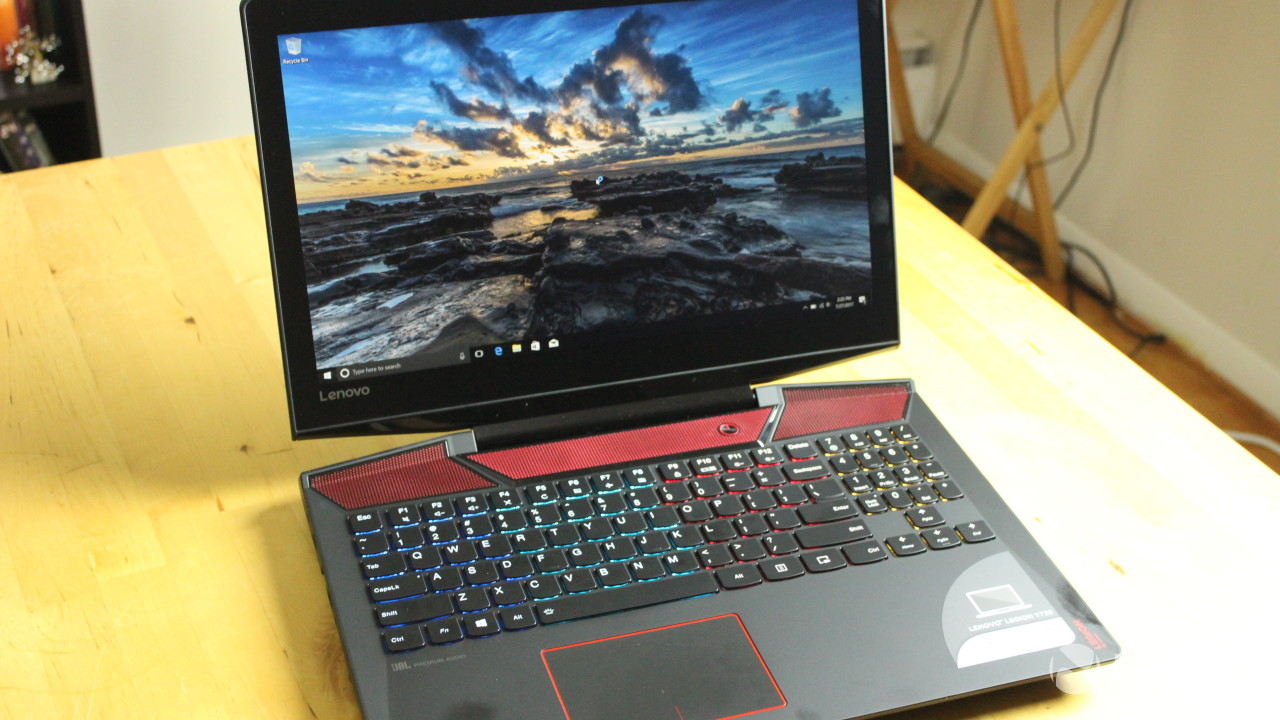 And while I've never said that 1080p is an optimal resolution for a laptop - especially one with a 15.6-inch display - the anti-glare aspect of it is clutch. When playing a game, reflections on the display could distract your gameplay, and block your line of sight, possibly causing you to miss something important.

If you really want 4K, you can always hook up to an external monitor if you want. There are plenty of ports for that, as it includes HDMI, Mini DisplayPort, and Thunderbolt 3. The latter doubles as a USB Type-C port, and you can use it to connect to two 4K screens or a single 5K monitor.

I found the lack of a touchscreen to be disappointing, as I've grown accustomed to them in Windows devices. A non-touchscreen isn't even uncommon in gaming laptops, but I'm a fan of a consistent experience across all devices.

I'm in possession of both a Legion Y720 and the more powerful Legion Y920. The one thing that I like a lot more about the Y720 is the keyboard. While it's great for gaming, it's also suitable for work, meaning that I can type up an article on it if I want to. 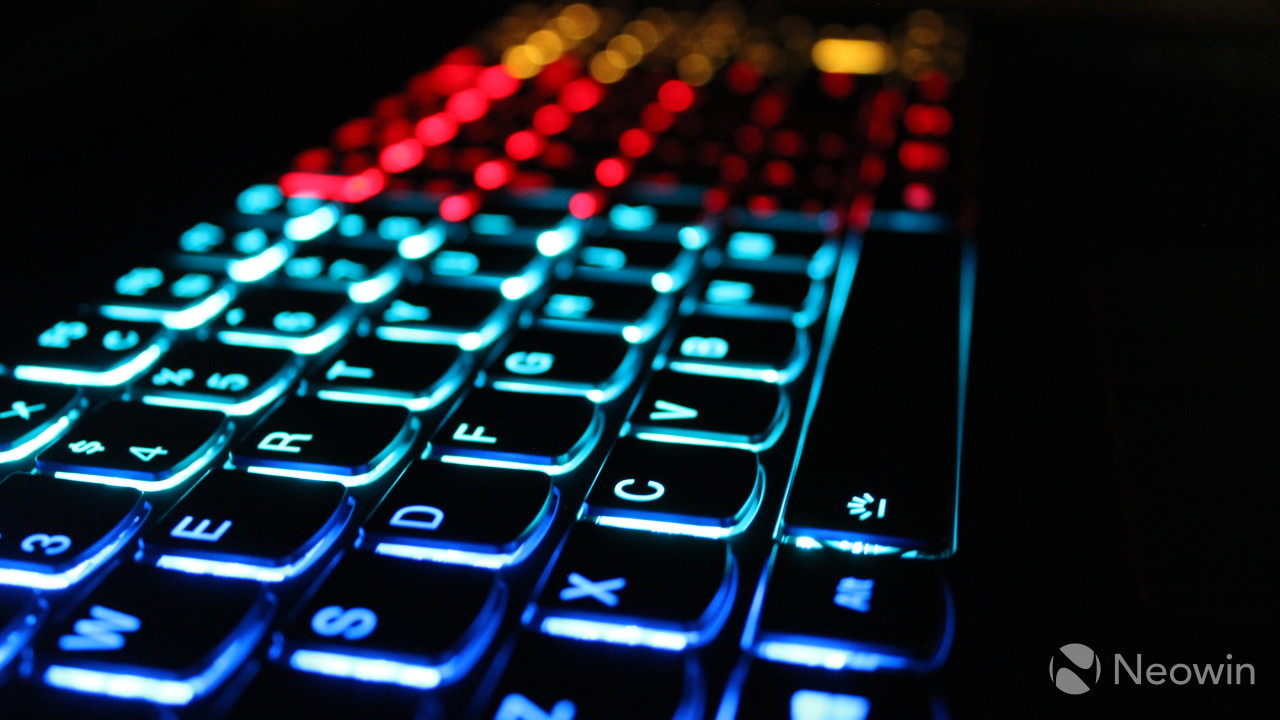 Obviously, this is a machine that costs a lot of money, so that type of dual usage is important. Also, I realize that many gamers might not care about this at all, but it's certainly worth noting.

Of course, the keyboard is backlit, which is configurable through the Lenovo Nerve Sense application. It's divided into four parts, and you can choose between 19 different colors for each one, or no lighting at all.

Nerve Sense provides a number of other customization options as well, such as adding the ability to turn on the Extreme Cooling feature with a keyboard shortcut. You can also set it so that the trackpad and Windows key are disabled during gameplay to prevent accidental input, and you'll also be able to create a keyboard shortcut that allows you to use them when you need to.

One keyboard feature that I found particularly cool is that there's a dedicated screen recording button. I liked this because I hate that in 2017, I still usually have to use third-party software to record my screen, so it's helpful to have one built into the device. The button is right next to the Ctrl button on the right side, and you can just press it once to start recording, and press it again to stop; the video will be saved to the Videos folder.

Lenovo says that the Legion Y720 should get up to five hours of battery life, and I've found this number to be a bit generous. After all, much of the time that I've spent testing it have been playing games - I assume that's how most people will be using it - and that uses quite a bit of juice.

In reality, I've found that it gets more like three or four hours of battery life, and as I mentioned earlier, I think that can be forgiven. This is some powerful hardware, so if you want power, you can't be surprised when it uses power. Intel has done a lot to make its Y- and U-series chips very power-efficient, but this is an HQ-series processor, meaning that it's pretty much in beast mode.

Lenovo boasts that the Legion Y720 is the first laptop to use Dolby Atmos, and it sounds phenomenal. You're not going to need external speakers with this machine, as the built-in JBL speakers can get pretty loud.

Like Huawei's MateBook X, which also includes the feature, includes a Dolby Atmos app so you can configure it.

You can set the app to various preset audio profiles, including Movie, Music, Game, and Voice, or if you're lazy like I am, you can set it to Dynamic, and the system will try to determine what type of audio content you're consuming. I've found that it's pretty good at it, by switching between the default Dynamic setting and what it should be imitating.

And then there's the Personalize settings, which offers an equalizer, Surround Virtualizer, Dialogue Enhancer, and Volume Leveler, just in case you don't trust any of the other settings. 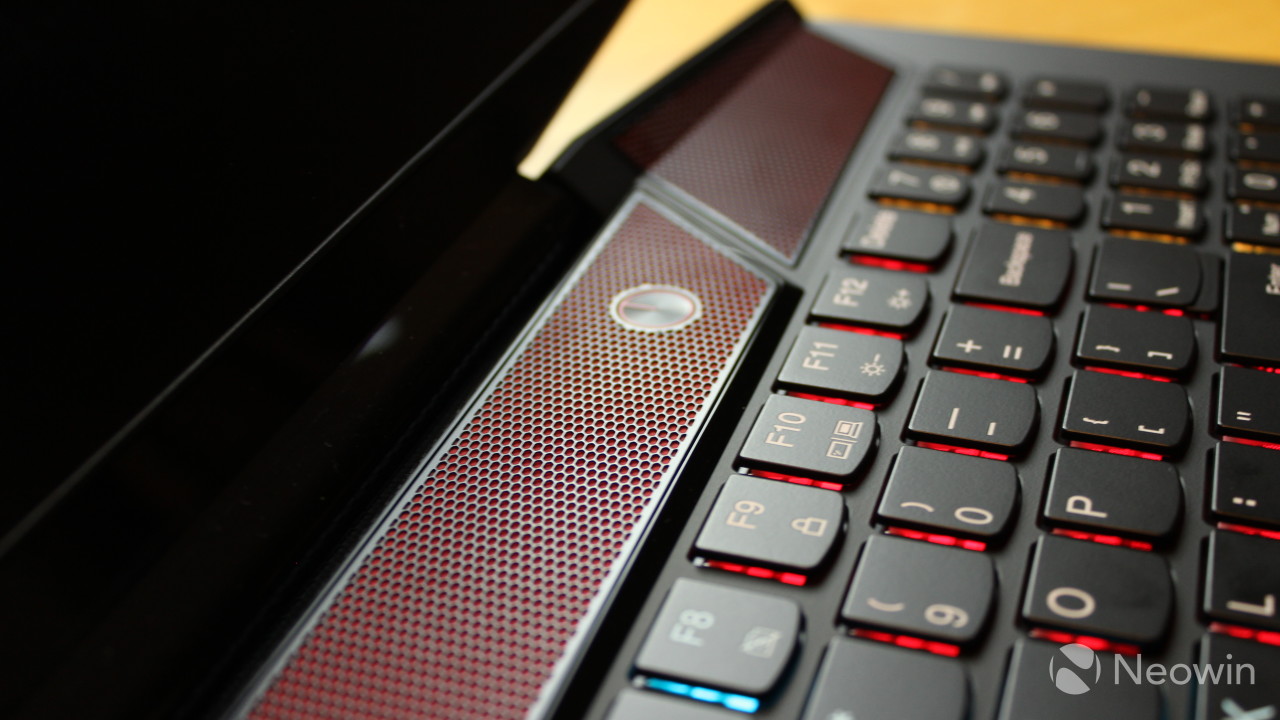 Ultimately, the speakers sound fantastic, and you're probably not going to find yourself configuring them at all. After reviewing a few laptops with Dolby Atmos, I'm not sure I would buy one that doesn't have it, and that's saying a lot.

The model that I was sent uses Intel's Core i7-7700HQ processor, and to break that down, the first '7' in 7700 stands for seventh-generation, or Kaby Lake, and the HQ means high-performance graphics, quad-core. This is not to be confused with the HK-series, which is the same but unlocked for overclocking. The Legion Y720 is also offered with a Core i5 HQ-series chip.

I've done my best to put the Y720 through its paces in my time with it, and it runs like a dream, doing everything from video editing to playing games. I did the video editing with Adobe Premiere Pro, and the games I tested were Quantum Break, Gears of War Ultimate Edition, Forza Horizon 3, and Star Trek Online. The former three are available through the Windows Store, and the great thing about that is that I was able to easily move them between the 128GB SSD and the 1TB HDD.

Interestingly, I didn't notice a performance hit when running games off of the HDD (hard disk drive) verses the SSD (solid-state drive), as I did expect to. 128GB isn't a whole lot of space, especially when you're talking about massive games, so it was nice to see the games run well off of the larger HDD.

As you can see, the Legion Y720 comes in at 66% better than other devices, which include desktops and other gaming laptops with better specs.

Next up is the Creative test, which looks at more power-intensive tasks like 4K video editing and more.

The final test is Work, which checks in on productivity-related tasks.

For work-related tasks, the Y720 comes in at better than 80% of other products, which isn't surprising given how powerful this machine is.

One more thing that's worth noting is that the quad-core processor and Nvidia GeForce GTX 1060 GPU combination is VR-ready. I've tried out some Windows Mixed Reality head-mounted displays (HMDs) on this - like Lenovo's Explorer - and the experience is pretty sweet.

Lenovo's Legion Y720 is a great mix of power and portability. There are most definitely laptops with better specs on the market, such as the Y920 and devices with an Nvidia GTX 1080, but the lighter specs on the Y720 leave it a bit lighter and easier to carry around, without feeling like you're sacrificing anything. 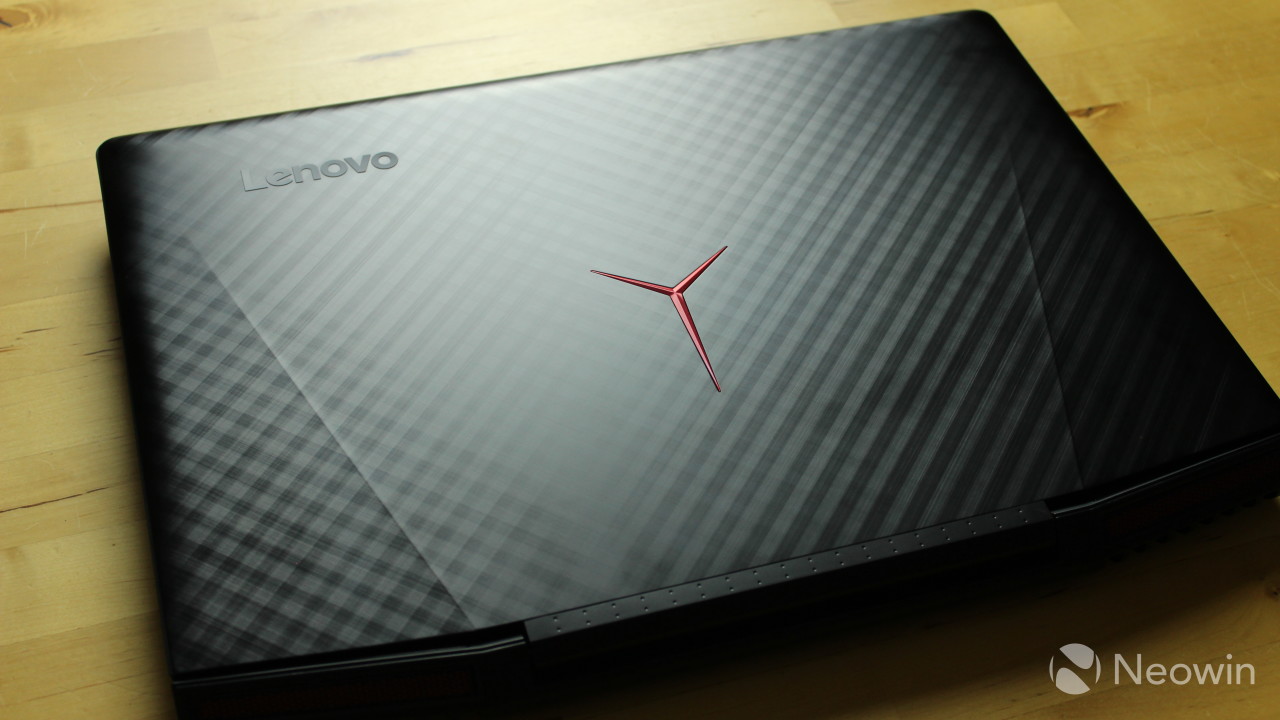 I do wish that the device included something for Windows Hello - like facial recognition or a fingerprint reader - and a touchscreen, but I can live without it. After all, it's not affecting the gaming experience. It just feels a bit barbaric to have to type in a password in 2017.

Ultimately, I think that any gamer would be happy with the Legion Y720. The anti-glare display is clutch in tight situations where a glare might throw you off, and the Dolby Atmos audio sounds great whether you're listening to music, playing a game, or watching a movie.

But most importantly, it's powerful. Whether you're video editing, playing a game in 4K on an external monitor, or using a virtual reality experience, this laptop simply doesn't struggle.